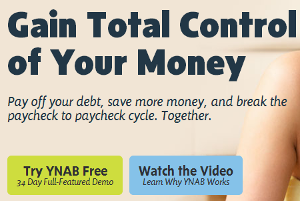 I started using YNAB a few months ago and have sporadically updated my progress, but after a comment, decided it was time to do a true review and update.

I am using YNAB for Excel, meaning that it’s a spreadsheet. It’s not as fancy as YNAB Pro, the standalone program, but it’s exactly what I need.

First off, I love spreadsheets. I love that I can edit this as I please (of course, for fear of screwing things up, all I edit is a bit of the formatting). I especially love that I can use it at work or at home.

I keep the official copy of my budget on my computer at home, but in my GMail Drafts folder is an e-mail with a draft copy of the budget. That way, I can update it on my lunch hour, or check to see what kind of money I have left in my dining out budget before going out for drinks. Plus it’s just a second backup of the file – if something should happen to my computer at home and my external hard drive, I’ve still got a copy in my e-mail.

The Best Features of YNAB

I’m not sure what I like the best about YNAB. I love the general method of living on last month’s income. It’s nice to have a bit of padding and know that if something comes up and I overspend by $100 this month, I have the money for it, I just have to spend less next month. I love that I can make up whatever categories I want. I love that I can change my budget month to month with no difficulty.

Perhaps this is not kosher on the YNAB plan, but I love that I can make a budget on the 1st of the month and then on the 15th, move things around so the budget reflects my actual spending. Yes, I realize that defeats the idea of the budget, but I have created for myself an “other” category. Some things just automatically go in there, like items I will be reimbursed for. But for the most part, that money gets moved around. Grocery budget falls short? Pull from the other category. Decide to spend more on someone’s gift? Other category. I treat it as a flexible spending category – the money I can spend on whatever. And at the end of the month, if there’s something left, it goes into the “Wishlist” category. I have this short list of things that I want to buy – books, movies, electronics, other non-necessities – and the more money that I can get into my wishlist budget category, the closer I am to buying one of those items.

I like that it tells me how much I’ve spent in each category so far for the year, and I like that I can very easily see where I’ve gone overbudget. Those bright red numbers really do help curb my spending.

I think my favorite thing is the ease in planning ahead. I know that my bi-annual car insurance payment is coming up in a few months. I have been budgeting 1/6th of that amount for the past few months so that when the payment comes due, I will have all that money set aside. Yes, I realize I could do this without YNAB, but I like that the spreadsheet carries the amount over for me. It has really made saving for big purchases much easier.

Some people don’t like the idea of YNAB because they think it will be time consuming. Making my monthly budget takes maybe 15 minutes. I like to enter my expenses every few days, and I do so by saving receipts in my wallet. I also do most of my spending by credit card (and I don’t track my cash, just record a “cash” expense) so it’s easy to pick up any expenses I might miss. This can easily be done on a weekly basis, and really doesn’t take that long.

I really like knowing where my money is going. Am I saving more? I think so, especially in the months where the big expenses (like insurance payments) hit. Before YNAB, I would just pay the entire bill and then have to really scrimp with the rest of my spending. Now that month will be just like every other month. I’m slowly trying to build up money in a number of categories as well, so that I can have a bit of a buffer in my grocery budget if I want to splurge, or in my clothing budget if I find a great pair of shoes on sale.

While I highly recommend YNAB for anyone looking for a budget, I understand that it’s not for everyone. I do recommend some method of tracking where your money goes each month. You might be surprised.

How do you budget?