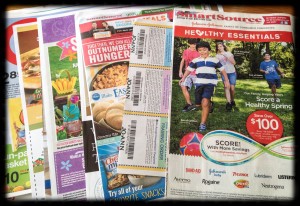 I had big plans for this post.  I was going to finally update my net worth after many, many years.  Alas, my computer is at the spa, aka the Genius Bar.  My left shift key decided to retire early and so my computer is in the shop being repaired.  Thankfully, I bought the extended warranty when I bought the laptop, so it should cost me exactly zero dollars.  My favorite price.  Let’s hope that’s still true when I go to pick it up.

Instead, I will be talking about something that gets a lot of attention in the personal finance and frugality world – couponing.

I am TERRIBLE at couponing.   I’ve considered going all extreme couponer and trying to pair good coupons with good sales and create a stockpile of things.  And instead of stockpiling, I would be able to donate a lot of it to the local food banks.  Everyone wins, right?

That plan lasted approximately three days.  Couponing is not for the weak of heart.  I am impressed with anyone who manages to do it.  I cannot do it.

No, instead, I try to use coupons like mere mortals do.  I clip coupons for items I use and then put them in an envelope in my planner to use when I grocery shop.  I have a cool coupon organizer that I fail to use. I put coupons in it and then forget to check it before shopping.  That’s not how coupons work.  In fact, I can see it sitting on my desk and it’s probably filled with coupons from last year.

My coupons all live mashed together in a single paperclip.  The goal is to use the good ones before they expire.  To me, a good coupon is for something I regularly use, be it canned soup or cleaning items.  Preferably for things that I can stock up on without them going bad quickly.  And yet, 90% of the time, my coupons end up expiring before I use them.  Every so often, I plan properly and the coupons get used.  But it’s just not something I’m good at.

I’m sure part of it is that I’m cooking for myself, so I don’t really meal plan.  I cook maybe once a week and then eat or freeze leftovers.  Other meals are created from previously frozen leftovers.  It’s a system that works well for me, but it means that I don’t do a ton of grocery shopping.  Maybe one big shop a month.  And that’s when the coupons get used.

I’m going to try to be better about it though.  I may not be able to always match up coupons and sales, but I should make a point to use my coupons when I do that monthly shop.  They do add up.

Now I’m off to clip this weekend’s coupons.