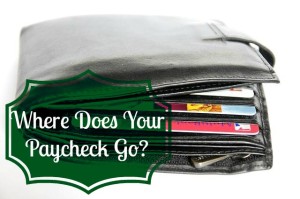 A young friend recently got her first “real” job and was very excited at the prospect of her huge, enormous paycheck.  And sometime during this celebration, she learned that taxes would be taken out of her paycheck.

Never mind that she somehow made it to her mid-20’s without realizing this, but when she asked me how much would be taken out, I told her that a rough estimate I like to use when I’m calculating pay is that you will take home around 65% of what you make.

Then I wondered how true that really was.

Where Does Your Paycheck Go?

I admit, I don’t look at my Earnings and Leave statement often.  In fact, I almost never look at it.  I check my vacation and sick leave numbers in our time card system, and provided that the amount deposited into my bank account every other week is right, I don’t worry about the details.

So this week, I took a look at my E&L statement to see what those numbers really were.

We start with 100%.  That’s the total amount I have earned for working 80 hours this pay period (Pay Period 7 is the one I’m working with, because it’s the most recent paperwork available online).

The biggest deduction is the Federal Tax at 17%.  Yikes.  That’s a lot of money.  I do know that my withholdings are wrong.  I get back more money when I file my return than I would like.  (I mean, I like getting money, but I would be better off if I figured out the calculation so that I was getting back less than $100.)  That’s something on my list of things to work out.

The second biggest deduction?  You guessed it.  State Tax at 7.5%.  This calculation is a bit better.  I get a small amount back from the state, but not so much that I’m worried about the numbers.  Besides, one year I was WAY off in my state tax calculations and ended up owing a few thousand dollars.  That hurt.  So I’d rather get back a few hundred dollars than have to pay them even more.

Next up we have future planning.  Social Security takes 6% and I put 5% into my 401k.  I get a match for the first 5%, so that’s the bare minimum I will contribute, but it wouldn’t hurt to increase that amount.  I also put money into a Roth IRA, so this isn’t my only retirement savings.

Another 1.5% goes to Medicare.  Hope it’s still around when I retire, but I have my doubts.  Either way, it’s important to support my elders, who supported me when I was young.

Just under 1% goes to a required retirement plan with the government.  This will allegedly pay me an annuity when I retire in many, many years.

Finally, 0.5% goes towards my life insurance policy. The opportunities to opt-in to life insurance are weird in the government.  Last time I checked, you could only opt-in when you started your job.  So even though it’s maybe not necessary now (I don’t have any dependents), it’s not a bad thing to have, and it’s not all that expensive to begin with.

Rounding out the numbers, that means I don’t take home 65% of my paycheck.  I take home closer to 59%.  41% disappears in deductions.  It’s kind of painful when I think about it in that manner, but at the same time, it’s interesting to see where it all goes.

At the end of the day, it’s always best to not dwell on it.  Though I might not like that so much of my check goes to taxes, those taxes fund a lot of important things in my world, so I’m not going to complain.

But I definitely need to figure out how to knock down my federal tax payment so I’m not getting so much back next year.  And I could just redirect that amount into my 401k.  Two birds, one stone.

How much of your gross pay do you actually take home?