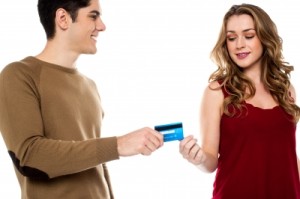 Last weekend, I traveled with a group of five friends to Las Vegas for a weekend of kayaking and running.

I know, I know, not the typical girls’ trip to Vegas. But I suppose we’re not your typical girls. We did manage to pull an all-nighter and do the “walk of shame” the next morning, but that all-nighter involved a midnight half marathon and the walk of shame was us in our gross running gear.

The trip was not cheap, with flights and hotel rooms, but we found a great price for a three bedroom suite. Of course, while we each paid for our own airfare and typically were able to have the checks from meals split up, the hotel was all put on one credit card and then divided up.

Because I was one of the first to arrive, I put the charge on my credit card. Ouch! But thankfully, I have great friends who immediately paid up when we got the bill. No questions asked, everyone just wrote a check or sent me the money via PayPal. During the one meal where we weren’t able to split the bill, everyone just tossed in cash without question. We actually ended up with way more money on the table than needed, even with a 20% tip.

I’m lucky that I have a group of friends who so willingly pay their portion. Unfortunately, that’s not the case with everyone, and friends and money can be a tough combination.

I’m sure we’ve all been out to dinner where, when it’s time to pay the bill, everyone throws in their money, including tip, and the end amount is still low. As typically happens, everyone throws in more money, so the majority of the group has overpaid, while someone (who you can’t always pick out) has clearly not paid their portion.

I’ve also heard people argue when splitting hotel rooms. Let’s say that there are three of us sharing a hotel room with two double beds. That means two people share the bed. At the end of the trip, how is the bill divided up? In my opinion, it’s divided by three. Others would argue that it should be divided so that the person who had their own bed pays half while the other two pay one quarter each. After all, they used less sleeping space. Personally, I think that’s ridiculous – you’ve still had to split the bathroom by three and the living space by three. (Of course, if I’m sharing with people who I know have much tighter finances, I’ll argue to pay half. It’s the nice thing to do.)

And sometimes, these complications as to who pays what can cause problems between friends. That’s part of the reason so many people argue that friends and finances shouldn’t mix. I disagree – had we not mixed finances and friendships, I would have missed out on an amazing trip this past weekend. But you just have to be aware of who you are mixing your money with.

Do you mix friendships and finances?