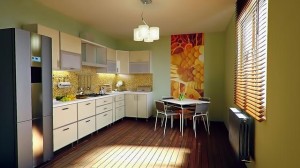 For those of you who have been reading CMP for a while, you know that I’ve had a few roommates while living in the DC area.  I’m picky about my roommate situations.  The two lovely ladies I lived with were both people I knew personally prior to becoming roommates.  In one case we were friends, in the other, she was friends with my younger sister.  In both cases, I knew these were good people who would be good to my cats and take care of my home and not rob me blind.  My last roommate even moved with me from my apartment into my house.

While roommates inevitably come with some complications, it was certainly nice to have the added money every month.  So there wasn’t arguing over who owed what, I just charged my roommates a flat fee, and took care of utilities myself.  I figured if I found out my roommate was taking 7 hour showers, then we would have to have a conversation, but otherwise, it was fine.

Searching for a Roommate

When my last roommate moved out, it was certainly a hit to my budget.  Definitely still manageable, but that was a huge chunk of income gone every month.  But I wasn’t ready to just move in any stranger.  I just let it be known that I had an open room and if a friend or a friend of a friend needed a place.

This past week, it looked like someone was going to take me up on that offer.  And without even talking to her in detail, I started thinking about all the things that added money could do.  I thought about where all the current furniture in the guest room would have to go.  I wondered how she would feel about my bike in the living room.

And I found myself researching what it would cost to have a cleaning person come in twice a month.

Yes, the first thing I did when I thought about added income was to figure out how to spend it.  Never mind that I’m on a no-spend month (and failing miserably) because my expenses have been exceeding my (spendable) income.  Never mind that I keep thinking about all the big things I want to buy or the funds that I should increase.  I immediately went to “What can I buy with this?”

(Though in all honesty, a twice monthly housekeeper would be amazing.)

Of course, the whole thought process was for nothing because my friend moved in with a family member instead, which gives her the chance to save money.  But it has made me really think about what has happened to my financial thought process.  I used to be so much better about saving.  Where did Frugal Megan go?

Maybe Frugal Megan should think harder about finding a roommate.  One without four legs and a tail.