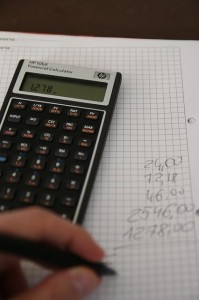 Retirement. It is this mythical life event that I continually hear about at work, but something at I don’t think all that much about since I am so very many years away from it.

But I should be planning. Now is the most important time to be saving for retirement.

So I put money into my 401k and I fund my Roth IRA every year.

But really, how much should I be saving?

I decided to ask Google.

(Amusingly, when I started to type “how much money…,” one of the autocomplete options was “How much money does Bill Gates make?”  Yes, Google, that would be a sufficient amount of money for retirement.)

How Much Should I Save for Retirement?

The first site that came up was Kiplinger.  This is a calculator. Okay, shouldn’t be too hard. I know my current income and can estimate when I will retire. But then it gets tough. Social Security income?  I have no idea. Assuming Social Security exists still when I am old enough to retire, I have no clue what my payments will be. So let’s go with zero.  Pension income? No idea. It depends on my salary when I retire. Let’s pretend I get no raises for the next 30+ years.

That is… A lot of money.

The calculator also tells me how much money I should be saving each month, and I’m not terribly far off from that amount. So that’s a good feeling. Of course this all assumes that the market doesn’t crash and nothing else happens to change the course my life is currently on.

And that’s just one calculator. Other calculators give widely different numbers.

So what’s the answer?

First off, if you have a retirement plan with work with an automatic match, try to contribute enough money to get the maximum match available. That’s just free money, and you shouldn’t pass that up.

From there, the main options are contributing more money to your work retirement plan or contributing to a Roth IRA.  Which one you choose is really up to you. It depends on which one you think is the better bet.  And of course, a Roth IRA is post-tax dollars and your work retirement plan is pre-tax dollars. That means that when you go to take it out of the plan, you’ll have to pay taxes on the work retirement plan but not on your Roth IRA. It’s probably a fair assumption that you’ll be in a higher tax bracket, are the taxes will be higher in general, when you do reach retirement, so the Roth may be the better deal. Again, I’m not the expert to make sure you do your research.

It’s complicated for sure.

So for now, I’ll just keep saving. I’ll just keep putting money away for the future, and occasionally checking on those numbers to make sure that I’m doing what’s right for me.