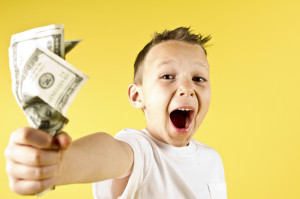 I use the YNAB method of budgeting, which means that every dollar has a job.  All of my money goes into various budget categories and I work to stay within those budget categories.  Some of those categories are the more serious ones, the ones where I have to budget a certain amount.  Serious categories include the mortgage payment, gas and electric bills, taxes, etc.  Once I’ve gotten the big things budgeted, I figure out what to put in the more flexible funds.  These funds include things like vacation and entertainment.

One very important fund is my Frivolity Fund.  I do my best to have a little bit of money in this fund every month, though it doesn’t always happen.  In terms of priority for my dollars, it’s probably last on the list.  But in terms of how it helps me stick to my budget, it’s very important.

My frivolity fund is money that I can spend on whatever I want.  Sometimes it gets added into another fund.  I only have $5 left in my entertainment budget for the month but I really want to buy that book?  Take some money from the frivolity fund.  Sometimes I use it to go out to eat.  Sometimes I just spend it on something ridiculous, like the plastic dinosaurs for my air plant terrarium at work or the inflatable unicorn horn for my cat to wear.  Totally frivolous, but it makes me happy.

I’ve found that having money in my budget that I can spend on anything has really helped me stick to the budget.  While making sure your bills are paid is important and paying down debt is important, having fun is also important.  And yes, many fun things are free, but when you’re working so hard, you do need to have a bit of fun money in your budget.  Otherwise, I’ve found it becomes all too easy to say “Forget the budget, I want to buy this!” and suddenly you’re budget has been blown to smithereens.

Now, you have to be reasonable with the Frivolity Fund.  And it shouldn’t have a lot of money in it each month.  Mine usually has around $20, though if I don’t spend that $20 in one month, I can add it to next month’s fund.  Some months it has less because I need to put that money elsewhere.  This has to be money you can afford to spend on something pointless.

I know people who make a point to keep their Frivolity Fund in cash.  For me, cash is incredibly hard to track, so in my budget, I just have a line item for cash.  I’m not good at saving receipts and categorizing them.  I know it’s not hard to do, it’s just something that I’m not good about doing.  So this would work for me.  The money that I take out in cash can be spent on whatever I want and when it’s gone, it’s gone.

The big key to the Frivolity Fund?  No regrets. This money is designed to be spent on whatever floats your boat at any particular time.  Yes, the money you spent on that comic book could have been spent on something more important.  But you’re allowed to have fun.  You should have fun.  You set aside this money to be used for fun, and that’s its only purpose.  While paying down debt feels good, it’s not exactly fun.  And while you might be able to go one month or maybe even a few months without any silly expenditures, it will happen, and you will feel guilty because that money was earmarked for something else.  Let the Frivolity Fund take care of that stress for you.

And go buy an inflatable unicorn horn for your cats.  It is the funniest thing you will see all day.