The holiday season has arrived and with it comes hundreds of requests for charitable donations.  Some of this has to do with the holiday spirit, but some of it has to do with the fact that we’re nearing the end of the year, and if you want the added tax deductions for the charitable donations, you need to get those done before the end of the year (or you can just claim them on your 2015 taxes, of course). 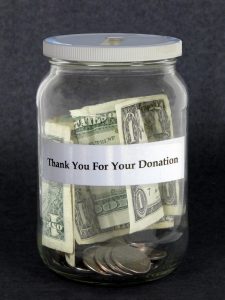 I don’t know about anyone else, but I feel completely inundated with charitable requests.  Friday night alone, two different groups knocked on my door to try to get donations.  As a general policy, I won’t sign up for any sort of donation in person.  I don’t like the pressure and I want the ability to research the charity before I agree to give them money.  A few years back, I did get talked into signing up for a donation in person and it took forever to get “unsubscribed” from the donation.  Never again.

(Of course, if the neighbor kids show up fundraising or if the local firefighters are collecting funds at a stoplight, I will absolutely contribute.  Those situations are a totally different story. )

I do track my charitable donations throughout the year.  I use TurboTax to do my taxes.  It’s what I’ve used for years and it’s what I’m comfortable with, so I’ve had no desire to switch.  Conveniently, their website has a feature called Its Deductible, where you can track your charitable donations throughout the year, and then when it’s time to do your taxes, it downloads directly into TurboTax.  Pretty convenient.

But even before I used this feature, I made a point of tracking all of my charitable donations in a spreadsheet.  It made doing my taxes so much easier.  Too lazy for that?  Save your charitable receipts somewhere.  If they’re electronic, file them away in your email.  If they’re paper copies, put them in a box or a file folder.

Of course, this all assumes that you don’t take the standard deduction on your taxes.  As a homeowner with a mortgage, it’s worth it to me to itemize.

How do I choose which charities I give to?  A couple of ways.  There are a few groups that I have personal ties to, and I give to them every year.  If a friend is running a race or otherwise fundraising for a charity, I will usually give a bit of money to their efforts.  (In fact, I just paused in writing this as it reminded me to go make a donation to a friend’s fundraising page.)  I don’t know if it’s the norm everywhere, but where I’m from, often at a funeral, the family will ask that in lieu of flowers, a donation be made to a certain charity, and in that case, I always make a donation.

Of course, these may not be big donations, but for a charity, every dollar helps.

I also try to donate to non-profits that I benefit from.  Right now, Wikipedia is running their annual donation drive.  Do you use Wikipedia?  I do.  So I give them a bit of money every year.  Also, right now, I’m obsessed with the Serial podcast (like much of the country).  When they mentioned that they were looking to fundraise, I gave a few dollars to Chicago Public Media.  Yes, these are both things I can get for free, but I get enjoyment out of them, so why not throw a few dollars their way so as to keep it free for everyone?

One great way to research charities is through Charity Navigator.  They use a number of categories to score a charity, giving them a maximum score of 4 stars.  Of course, that doesn’t mean that if your favorite charity only got three stars that you shouldn’t give.  Go read the information and make a decision as to what you want to do with your money.

And of course, we don’t all have the ability to give money right now, and that’s okay.  But it is the season of giving, so think about giving of your time.  It’s a busy time of year, but lots of organizations are looking for help.  Can’t help now?  Make a commitment to give of your time next year.  Amazing groups can always use another set of hands.