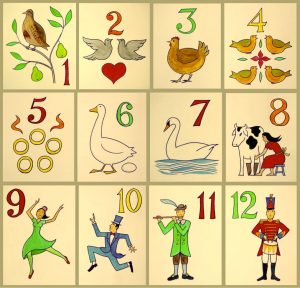 This has been tracked for thirty-one years.  Thirty-one years of gifts!  Not surprisingly, in most years, the cost went up, but there were a few tough years for our economy, and that’s where we saw price drops, such as in 2002 and 1995.

(Fun fact – December of 2002 was when I was applying for most of my post-graduate jobs, as I finished college in May 2003.  It definitely helped me pull the trigger on my law school plan.)

This year, the Price Index went up a whopping 1%.  I sort of assumed that with the rapid drop in gas prices that the price of the goods would drop, so an increase is good.  (There was no scientific reason for this assumption, of course.)  According to the press release, this was the smallest increase since 2002 when the index fell over 7%.

The Index then drills down and tracks individually how the price of each item changed.  Most items didn’t change very much in price.  The biggest mover was six geese-a-laying.  I hope you’re not planning on a Christmas Goose, because the price went up over 70%.  French Hens are also up 10%.  I guess it’s an expensive year for poultry.

The site added a bit of fun this year, trying to bring the song back into vogue.  I guess kids these days (always said while shaking your fist) don’t sing this song much, so the site added interactive elements to highlight each gift in the song, from a story to a film to a number of music videos.  It’s pretty adorable, and fun to show off to the small people in your life after you spend time scrolling through the numbers as I did.

Merry Christmas!  And if you’re buying your true love some pipers and drummers this holiday (or rather, hiring them, I would assume), you will be glad to know that the cost of their wages has remained steady.