Every year, I do a post on the cost of the 12 Days of Christmas.  You know the song. The one that ends with “And a partridge in a pear tree.”  For over 30 years, PNC Bank has been putting together The Christmas Price Index.  Yes, every year, a lucky employee gets to sit down and figure out how much it would cost to buy your “true love” all 364 gifts and how it compares to previous years. 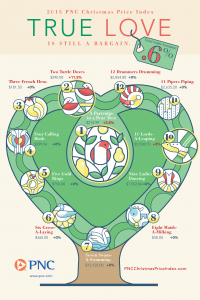 So it’s a silly little exercise, but it’s fascinating to watch the trends as they ebb and flow.  In past years, the jump in price has been more substantial (more than 6% in 2012 and 2013).  Last year was also below a full percentage point.  But this is still the most expensive Christmas ever, up by almost $200 from last year.

(Fun fact – the most volatile price in the whole index is the cost of the swans.  Who knew?)

So where did the price increases come from?  Let’s take a look.

Musicians didn’t have the best year, and their rates didn’t increase, so the Drummers and the Pipers cost the same as last year.

The Lords a Leaping (dancers at the Pennsylvania Ballet) received a 3% raise this year.  Nice job, guys!

Unfortunately, the ladies at the PHILADANCO! didn’t get the same raise.  No change there.

Milkmaids receive minimum wage, and so no cost increase there.

We’ll skip to the gold rings.  While gold did increase in price this year, gold wedding bands are still running around the same price.  No change.

Then we get to the birds.  I’ve never thought about it, but this song sure involves a lot of birds.  No price change for swans, geese, calling birds, or hens.  Turtle Doves and Partridges were in higher demand though, and both went up in price.  Turtle Doves are a whopping 11.5% more expensive, and Partridges (along with their pear trees) are up 3.5%  Good thing I’m not in the market for either.

The index first started in 1984, and PNC provided some interesting insights into what has changed since then.

First off, shopping is much easier thanks to the internet.  In the 80’s, how would you know where to buy Turtle Doves?  Now you can just do a quick search.  Of course, since you’re not buying local, you’re stuck with shipping and handling, which might be cheap for some items, but I bet those Turtle Doves aren’t easy to ship.  And no one wants to receive a box of geese.  These items are mostly priced locally, however, to keep the comparisons accurate.  I find that incredibly impressive.  Year after year, PNC has gone back to the same suppliers (for the most part) to check their prices.

The cost of services (the dancers, musicians, and milkmaids) has risen at a faster rate than the cost of goods.  This makes sense, as it seems we’re always trying to drive down prices but also pay higher wages.  For a long time, the Maids didn’t see an increase. Between 1997 and 2006, their wages were the same.  They received a raise in 2007, 2008, and 2009, and now the minimum wage is holding steady again.

The CPI has increased 84% since it started in 1984.  I wonder how many years it will be before the number is truly double.  It has dropped before – in fact, it was the cheapest it has ever been in 1995.  That says something about how much prices have risen in the past 20 years.

It’s probably a good thing no one is actually buying all these items every year.  That would be an expensive holiday.  Plus there would be so many birds.  So very many birds.