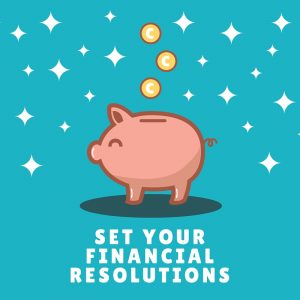 Happy New Year!  2016, can you believe it?  I don’t know about you, but for me, 2015 absolutely flew by.  I was looking back at some of the changes I made this year to try and save money and it surprised me how long ago I made some of those changes.

For example, back in January, I cancelled my cable tv.  I can’t believe it’s been a whole year.  I have zero regrets.  I had exactly one moment when I wished I had cable tv – I was trying to watch a specific football game.  But then I realized that I could watch it online.  So it wasn’t on the big tv, but it certainly wasn’t a problem.

So now we’re in a new year and I need to continue to tighten up my finances.  Things improved somewhat last year, but I still have more money going out than I would like.  So here are some of my financial resolutions for 2016.

I’ve kept a budget in YNAB for years.  Years and years.  But I have developed a problem.  I don’t look at my budget before I spend money.  I spend the money, then enter it into the budget.  But that’s not how it should work.  I need to make sure that I have the money before I spend it.  Obviously, when it comes to necessary expenses, such as a doctor co-pay or car repair, I’ll spend the money and then fix the budget later, but if I’m talking restaurant visits or even groceries, I need to see what I have available to spend before I spend it.

(YNAB has just released a new version which I have yet to form an opinion on, but I will be reviewing it once I’ve had more hands on time with it.)

I spend way too much on groceries.  I’ve gotten a lot better about it in recent months, but I need to continue this trend.  I signed up for a local CSA that is a bit more expensive than some, but it works well for me because the deliveries are somewhat customizable and I can skip weeks and not pay for those weeks. That way, I’m not spending on food I won’t use.  Having fresh produce delivered has meant fewer trips to the grocery store.  It’s also meant that I’m eating a lot better, which really is the purpose of the deliveries.  I’m also trying to be better about batch cooking and freezing, which has made food seem to go further.

Plan Ahead for Big Expenses

We all have bills that show up only once or twice a year.  Insurance payments, various subscriptions, etc.  In 2016, I’m going to be better about setting money aside every month so that I’m well prepared for those expenses.  No more surprises.

I’m fairly sure I’m going to be getting a decently sized tax refund this year.  While that seems good, it’s not, and I’ll talk about that more later.  The goal is to get as close to break-even as possible.  So I’m going to work up the numbers this year and reduce the amount of my “interest free loan” to the government.

How about you?  What are your Financial Resolutions for 2016?