Comparison.  Though it’s often referred to as a trap, I think it’s both good and bad.

But I think comparison is especially difficult when it comes to finances.  We want to have what someone else has.  The neighbor gets a new car and suddenly your car doesn’t look so great anymore.  Your friend goes on a stellar vacation and you start looking at travel websites.

A friend of mine, we’ll call him Mr. Jones, goes on fabulous vacations with his wife almost every year.  They’ve done European river cruises and they’ve spent time in Australia.  Some years, the vacations are “smaller,” like a week in Germany, and sometimes they go all out.  Now, I know what Mr. Jones and his wife do for a living and neither of them has a particularly high income job.  And we’ve discussed his plan to get their student loans paid off early (completed last year), so I know he pays attention to debt.

So finally, I said “I’m so jealous of your trips.  You guys must have great money management skills or know some great tips for finding good deals.”

And then he explained his methods to me.

It’s all about prioritization.  What in your life takes priority?  Obviously, they need a roof over their heads and food on the table, but beyond that, where do they want their money to go?

Mr. Jones and his wife live very frugally.  They own a small house.  It’s a bit of a fixer upper, so they are slowly working on it, but it’s more than liveable now.  So they bought it for a much cheaper price.  Rather than do all the work at once, they do a lot of trips to places like Habitat for Humanity Restore, so they buy a lot of the things they need at a significant discount.

Mrs. Jones loves bargain shopping and plans the weekly grocery trips accordingly.  She hits up a number of different stores in order to get the best prices.  They often spend less than what I do on food, and there are two of them.

They are big on using something until it can’t be used anymore.  Fewer disposable items, more reusable items.  Even plastic bags get reused. Why spend money on something when you don’t have to?

Now, nothing they do is all that grand.  A lot of people trying to save money are doing similar things.  But the big difference is that the Joneses then go and take extravagant trips.  Why?  Because they can afford it.  They save in other areas so that they can splurge on these trips.  (And of course, they’re bargain hunting for the trips too, but that’s another story.)

So from the outside, someone who doesn’t know the Joneses well, or just sees their photos on Facebook, may think they lead this fabulous life.  And they do.  But for them, it’s all about priority.  When I bought my house, I spent more than the Joneses did because I didn’t want a fixer upper.  I don’t have the skills and I certainly don’t enjoy that sort of work.  So my priority was getting a house that didn’t need a ton of work.  I also loathe grocery shopping, and while I will shop sales and use coupons, the idea of spending a couple of hours going from store to store with a detailed list of what to buy where sounds awful to me.  I can’t imagine doing it weekly, but Mrs. Jones loves the adventure.

So instead of trying to keep up with the Joneses, why not think about your priorities.  Maybe they go on great trips, but maybe you aren’t spending your evening putting up drywall.  It’s all about what you love and where you want your money to go. 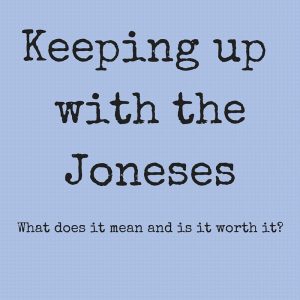