Snowzilla has come and gone in the Washington, DC area and I have emerged unscathed.  As of this writing, I’m not sure of our official snow totals, but everything I have heard has said at least 2 feet, so let’s go with that.

It turned out to be not so bad.  Don’t get me wrong, 2 feet of snow isn’t nothing, and it’s going to take the city quite some time to dig out.  But in most places, the power stayed on, and my cable even stayed connected, so while I was housebound, there was plenty of warmth and entertainment.

Watching the city prep for the storm was pretty entertaining, however.  There was a huge run on the grocery stores.  Shelves were emptied.  My friend told me Costco ran out of meat.  Let me repeat that.  Costco.  Ran out. Of Meat.  Not just rotisserie chickens or anything like that.  Their entire meat department was cleaned out.

Admittedly, we were being told to be prepared to be stuck at home for a week.  And depending on the size of your family, that might necessitate a bit of stocking up.  But I think people perhaps went overboard.

Unfortunately, people also took advantage.  I saw something online about a guy who bought a bunch of milk and bread and was selling it.  $20 for a gallon of milk or a loaf of bread, $35 for both.  Talk about taking advantage of the situation.  Some people will tell you this is just capitalism at its finest.  I think it’s awful and selfish.

Personally, I didn’t have to go out for anything.  I had done my grocery shopping the Friday before and I had plenty of food in the house.  I’m still set.  And since my power stayed on, there were no issues with cooking.  But I was prepared.

I made sure that I had things that didn’t need to be heated, like granola bars and protein bars.  I also have a bunch of canned soups that I can heat up on my gas stove.  These are things I keep around in general.  It’s never bad to be prepared for a winter storm or a summer storm.

I have a woodburning fireplace and plenty of firewood.  Late in the fall, I had the chimney inspected and cleaned, so I knew that the fireplace was safe to use.  Wood fires don’t necessarily heat a home as well as some people think, but if the power is out, it’s a great option.  Plus it just makes for a nice, relaxing evening at home.

One thing I did, just in case, was kept the house warmer than normal.  I raised the thermostat by a few degrees so that if the power did go out, the temperature had that much further to drop.  This will raise my heating bill this month, but I think it was a worthwhile expenditure.

I learned an interesting tip from a neighbor.  In the cold, if your power goes out, when your house starts to get cold, set up a tent in the living room or make a blanket fort and hang out inside.  The small space will stay warmer thanks to the body heat.  Plus it’s a fun way to entertain the kids trapped inside the house.

I also made sure that I had a shovel and good boots.  There was a run on shovels at the store earlier this week.  If you don’t have one, don’t wait til the snow is coming to buy one.  Go get a shovel on a nice, 50 degree day.  They’re easy to find and no one will fight you for it in the store.

Be careful when you go out to shovel.  It’s easy to injure your back and people do have heart attacks while shoveling.  There are mixed messages as to whether you should go out and shovel as the snow is still coming down or whether you should wait.  I did both, in a manner of speaking.  For my main sidewalk and the public sidewalk down the front of my yard, I shoveled a few times.  For the sidewalk towards my driveway, I only shoveled once.

Shoveling the 4 inches that fell Friday night was just stupid.  It didn’t make an impact.  But shoveling the 14 inches on Saturday afternoon before the blizzard picked up and dropped another almost foot of snow?  Definitely worth it.  Sunday morning was much easier, plus I could actually find the sidewalk.  Plus it had just been nice to get out of the house on the previous day.  I removed the snow in layers rather than try to just lift two feet of snow.  No injuries here.

And of course, when you do go out, be sure to dress properly.  Frostbite isn’t good for anyone.

So we’ll see how long it takes the city to dig out.  While we get mocked by northerners, and while our city officials perhaps don’t always make the best decisions, we also don’t have the number of plows that colder cities have, so it could take us a while.

Did you get hit by this snowstorm?  Have you ever been in a blizzard?  What tips do you have? 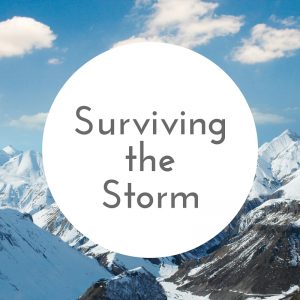