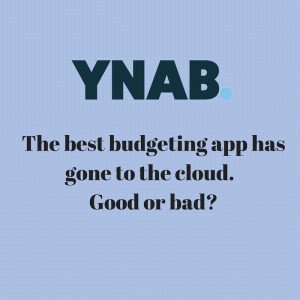 For years, I have been talking about YNAB – You Need A Budget.  This is my favorite budgeting program.  I have been using it since it started in its first iteration – an Excel spreadsheet.  Then they created a desktop version.  The desktop version got a mobile app and you could sync the two using Dropbox.  Now YNAB has gone to the next level – their latest version is entirely cloud based.  No need to sync using Dropbox.  No need to be on one specific desktop computer.  Your budget is available everywhere.

But this version has a number of changes, and as a long time user, I wasn’t sure how I felt about this.  But I started using the program in January and by the time my 34 day free trial was up, I was ready to subscribe.

Don’t get me wrong – it’s not perfect.  But one of the benefits to a cloud based program is that they are constantly making tweaks and updates and adding features.

(Oh, and if you LOVE the desktop version, no worries.  It’s definitely still available.)

So for the newbies, what is YNAB?  Well, they explain it better than I can, but it’s more than just a budgeting program – it’s a budgeting method.  There are four rules:

If you want to learn more about the method, check out my archives or just go over to their website and learn more.  And now onto the new app itself. 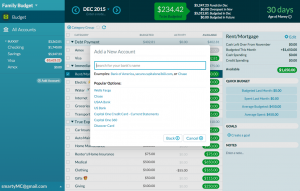 One of the big changes to YNAB is auto-import of transactions.  It used to be that you could download transactions from your bank and then import them yourself.  Now those import automatically.  But don’t worry, you can’t miss them.  YNAB tells you that “Hey, you have one new transaction on this account.” You click to import, then you still have to categorize and accept that.  That means nothing can easily sneak in.  I used to import weekly.  Importing much more frequently makes me focus on the individual transactions instead of looking at them as a whole.

Don’t want to link your bank info to YNAB?  That’s okay, you can still do it all manually.  Not a problem. 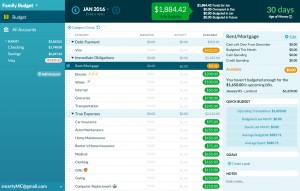 One thing I really like is how your budget shows you where you’re underfunded.  You can schedule your recurring bills in YNAB, and then when it’s time to budget for the next month, you can easily see where you need to be putting your money. 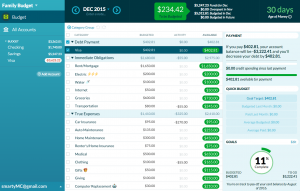 Along the same lines, you can set goals.  For example, I know that in September and December, my property tax bill will come due (50% each month).  I won’t get the bill until sometime in the summer, so I don’t want to schedule it as an upcoming bill.  Rather, I’ve estimated what I think the bill will be and decided, “Okay, I need to have $X in that budget category by December.”  I plug that into YNAB, and YNAB prompts me to budget the appropriate amount every month.  Say I should be budgeting $500 every month, but in January, I only have $450 to budget.  No big deal – YNAB will allocate that missing $50 over the remaining months until December.

This is also really helpful if you’re trying to save up for a trip or to make a big purchase.  Seeing your progress towards a goal is a great feeling.

YNAB deals with credit cards in an interesting way, and I’m not sure how I feel about it yet, but I think it’s okay and it’s probably great for people who are working to pay off their credit card balance.   Each credit card gets its own line in the budget.  But as you make purchases, the funds are moved for you.  Here’s an example.  I have $100 in my grocery budget line.  I spend $25 on my Visa on groceries.  When I input that amount, $25 is subtracted from my grocery budget line and moved to my Visa budget line.  See, the money is there to pay for that expense.  This allows you to keep using your credit card as you’re working to pay it off, if that’s something that you want to do.  You can chip away at the debt while still using the card and not adding to the debt.

One big downside that I can see to the new cloud based budget is that if the system goes down, no budgeting for you.  If you don’t have an internet connection, no budgeting for you.  That said, for me, it’s worth the risk.  The added accessibility means I’m looking at my budget much more frequently and keeping it more up to date.  So even if it’s not available one time I try to check it, I’m still able to use it more than I was.  (And I haven’t noticed any downtime yet.)  This style of software is becoming more and more common, and is probably the direction a lot of programs are going.  (For example, I drafted this in Google Docs and made the pinnable image in Canva, both online programs.)

What does it cost?  $5 a month or $50 a year (if you’re a previous user, you get a lifetime 10% discount).  And yes, when you’re working to get out of debt, spending money doesn’t always make sense.  For me, I think it’s worth it.  And if you’re unsure, try them out.  They have a free 34 day trial, and it’s a TRUE trial.  You don’t have to give them your credit card number or anything and then cancel before the 34 days are up.  Nope, just create an account and try it out.  If it’s not for you, no harm, no foul.

I’ve said that I’ve let my budget get out of control over the past few months, and it’s my own fault for not working closely with my YNAB budget.  This new program is perfectly timed for me and I’m excited to be getting started.