I was sitting at my desk trying to decide which of my blog topics I wanted to write about this week when my almost 12-year-old cat (one of two) jumped onto my lap demanding attention.  Clearly, my post topic was set.  What are the costs of pet ownership?  Obviously, this depends on the type of pet, but in general, the needs are the same. Food, shelter, medical care, etc.   I have cats, so let’s look at what I spend.

First off, let’s think about the lifespan of the pet, because you’re going to be paying this money for years.  Some animals live longer than others.  Some cats live more than 20 years, and I’m hoping for at least 16.  Large dogs have a much shorter lifespan.  Some birds can live 50 years or more.

There are a lot of pet foods on the market and choosing the right one can be complicated.  You want to spend a reasonable amount of money while still getting the highest quality food for your pet.  You also want to make sure you’re buying something that your finicky eater will consume.  (I still have a bunch of cans of pricey prescription pet food that my cat refuses to touch.)   Yes, you can just go to the store and pick up the cheapest food, but is that one going to be the best?  Frequently, the cheapest foods have a lot of filler in them.  As you would with your food, check out the serving size.  Maybe that food isn’t as cheap as you thought if you have to feed your pet twice as much for them to get the nutrients they need.  I like to buy the most nutritionally dense food I can.  Ensures that my picky eaters are getting their nutrients, and well… there’s less “end product” to deal with later.

Also, make sure you’re buying the proper product for the stage.  Cats shouldn’t eat kitten food and vice versa.  I buy a prescription food for my cats that prevents crystals in their urine.  One cat was having issues with crystals, which can lead to a urinary blockage and the need for surgery (or possibly death).  When I first bought it, I was shocked by the price.  $60+ dollars for 17 pounds of food.  But that bag lasts me a long time (around 3 months or so), so it’s not as expensive as it first seems.  And it’s worth it because my cats stay healthy.  And on the financial side, I’m not having to rush a cat to the vet for emergency treatment or paying for medications.

For my cats, this is an easy one.  They live in my house and sleep wherever the heck they want.  If you have an animal that lives in a cage, your costs will clearly differ.  But in the shelter category, let’s also include sanitation and care.

My cats are 100% indoor cats.  I do this for their health and safety.  But that means that they use the litter box.  Luckily, cat litter isn’t terribly expensive, but my cats do seem to have a preference for certain types.  (To the point where if they don’t like the litter, they will leave their deposit right in front of the box to show their displeasure.)   The box itself also has to be replaced from time to time (every couple of years) as it starts to get damaged from the scratches.

Cats are fairly independent creatures, so when I am gone on an overnight trip or even for the weekend, I can leave them at home as long as I ensure I leave them with enough food and water.  I always leave way more food than they need, so I’m pretty sure they like when I leave.  But if I’m going to be gone longer, I have a pet sitter come in and care for them.  That costs me $25 a day.  Could I find someone cheaper, sure.  But this is a person who I know and trust in my home, so I don’t mind the cost.  And at the holidays, I always make sure to give her an extra cash gift.  Worth every penny.

I’m very lucky.  My cats have been fairly healthy throughout their lives, urinary crystals notwithstanding.  I had them neutered while they were young, which is critical.  They don’t know what they’re missing and it makes them generally happier.  I have two male cats, and without neutering, they would be more likely to fight and display territorial behaviors.  Not to mention it eliminates the risk of testicular cancer.

They go to the vet every year for an examination and vaccination.  The cost of this varies around the country, but expect to pay at least $75.  My vet recommends that the cats have bloodwork done starting around age 10.  This can show organ function and thyroid function, giving the vet an idea about my cats’ health before they start to show major symptoms.  Yes, it’s an added cost, but worth it to me.  Other pet owners will have to make that decision.

Every few years, the vet will recommend dental work.  This isn’t like dental work for you or me.  The cats get knocked out for the cleaning, which allows the vet to really clean and check every tooth and extract any that have cavities or are getting infected.  Again, not required, but it’s something I always do upon recommendation.

But sometimes, your pets can need more medical care.  My parents have a dog who takes a daily anti-seizure medication, for example.  It’s not cheap, but it’s worth it to them, and it’s a commitment they made when adopting the dog.

There is pet insurance.  I don’t have it, and have heard mixed reviews of whether or not it’s worth it.  On that end, all I can recommend is that you do your research.

Is it worth it?

This seems like an expensive proposition.  Is it worth it?

Yes.  Absolutely yes.  Pet ownership is a great feeling.  Whether it’s a cat who curls up with you on the couch or a bird who sings every morning, having a pet is a great feeling.  Yes, this weekend I did get woken up by a paw gently tapping on my face because one of the cats was hungry, but all was forgiven later when he curled up next to me and started purring.

Just be aware of what you’re getting into when you adopt a pet.  Puppies and kittens are adorable and who doesn’t want to bring one home?  But check your budget first.  I am often tempted by adoptable puppies online, but I know that my budget doesn’t have room for a dog.  My work day is long and I would have to hire someone to walk the dog every day.  That right there would break my budget.  So no dog for me.  The cats are probably pleased by that decision.

Like any big purchase, do your research first.  And make the decision that’s right for you. 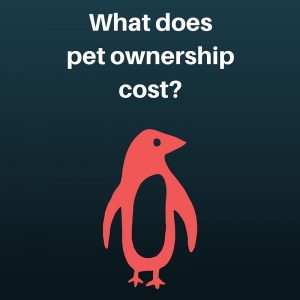