Escrow.  It’s a weird word.  And most people don’t know what it means.

An escrow is a financial instrument held by a third party on behalf of the other two parties in a transaction. The funds are held by the escrow service until it receives the appropriate written or oral instructions or until obligations have been fulfilled. Securities, funds and other assets can be held in escrow.

If you have a mortgage, you may also have an escrow account along with it where you pay 1/12th of your insurance and property tax every month and when the bills come due, the mortgage company pays the bill from that account.  One thing’s for sure, it makes those bills much less painful.

But you can also apply this concept to your own bills.  What bills do you have that you pay annually or biannually?  Car insurance, membership fees, subscriptions, maybe you buy a pool pass at the beginning of every summer, etc.  Expenses that you know are coming but maybe only happen once or twice a year.  Why not try to save a bit each month so that when the bill comes due, you’re ready for it?

Now, this has obvious benefits with bigger bills like car insurance.  Let’s say your car insurance is $600 every six months.  When that bill comes due, will you have an extra $600 in your budget just magically waiting for you?  Without budgeting, I sure wouldn’t.  But if you set aside $100 a month, when that bill arrives, you’ll be ready to pay it.

But what about smaller bills?  Say you have a membership fee that is $50 a year.  $50 is still a lot of money, but maybe you can move things around in your budget so it doesn’t break the bank that month.  If you saved monthly, however, you might not feel the pain at all.  Setting aside $4.17 a month is pretty simple.

The question is how to do this.  I use YNAB, and their new cloud based app has a “goals” setting. If I have a $50 bill coming in December, I can tell the app that my goal is to have $50 in that account by December, and it will tell me how much money I need to save every month to get to $50.  If I save too little one month or put a bit extra into the budget category, the app will redo the calculations for me.

But if you’re not a fan of YNAB, you can certainly do it on your own.  If you just want to escrow for one bill, like your car insurance, but you’re worried that you might accidentally spend that money, I recommend opening up another savings account and transferring money into it every month.  You can even set this up as an automatic transaction so you don’t have to think about it.

You can also sit down and say “Okay, what are all of my annual and biannual bills?”  Add up the total, divide by 12, and that’s how you figure out what you need to save every month.  Of course, this isn’t quite accurate, since all those bills aren’t coming due in 12 months, but it’s a start.  The best way would be to figure out what you need to save each month based on when each bill is due.  It seems daunting, I know, but if you sit down with a piece of paper, a pencil, and maybe a calculator, you’ll figure it out in no time at all.

We’ve all had those days where we’re going along, budgeting, feeling good about keeping the spending under control and then an annual bill shows up and blows everything to smithereens.  Self-Escrow.  It’s a great way to prepare for those larger expenses with the least amount of pain possible. 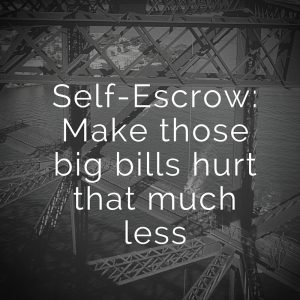