I have a confession to make.  I don’t have a substantial emergency fund.

Well, that’s not entirely true.  I have a savings account that I started a while back, but haven’t contributed to in far too long.  I have some money in investments that I could sell off if I was suddenly really strapped for cash.  But I don’t have an account with a chunk of money specifically set aside for emergencies.

Conventional wisdom will tell you that you should have the funds to cover anywhere from 3 months to 6 months (or more) of expenses in your emergency fund.  Note that I said expenses, not income.  And in an emergency situation, you may be able to tighten up your expenses.  What’s the purpose of this?  It covers you in case something happens and you lose your job or you can’t work due to illness or injury.  Basically, your paychecks stop coming.  What do you do?

I am lucky enough to work somewhere that I can just continue to accumulate sick leave, so in many ways, I consider that part of my emergency fund.  (Could I still get fired?  Yes, but I think the odds are miniscule.)  But I can’t just rest on my laurels.

To me, a bigger purpose of an emergency fund is for the unexpected expenses.  Things you haven’t planned for that suddenly cost you money.  Because let’s be honest – while any of us could get sick or get fired, the odds are high.  But the odds of suddenly having an unexpected expense?  Much higher.

Maybe I should call this an “unplanned expense” fund.

Here’s an example.  The fence in my backyard was old, but functional.  Should I have been setting aside money periodically to cover fence replacement?  Yes.  Was I?  No.  So one day, I realized that the fence was starting to lean significantly, and if it fell, it was falling right onto the neighbor’s car.  That wouldn’t be good.  So I hunted around and found a company to replace my fence for a reasonable fee.

I then had a new, beautiful fence in my yard.  And a large bill to go along with it.

I was able to pay the bill, of course, but it meant some real re-working of my budget and some funds out of my savings, which wasn’t something I wanted to do.

Instead, what I should have done was set aside money each month for unexpected expenses.  Now, maybe my example wasn’t great because that fence was old and I should have realized I was putting in a new fence sooner rather than later.

Maybe my car suddenly breaks down.  Maybe my air conditioner dies.  Maybe someone driving by my house veers off the road, hits my beautiful fence and drives off again (okay, so my insurance might cover that).  I think that unplanned expenses like these are much more likely than a major job loss, and an important reason to build up a fund to cover these expenses when they arise.

So maybe you’ve put off a formal emergency fund because you just didn’t think it was necessary.  But have you thought about the unplanned expenses that might pop up?  Why let them destroy your budget?  I know I’m going to try to set aside a bit of money every month so that I’m ready.  Will you? 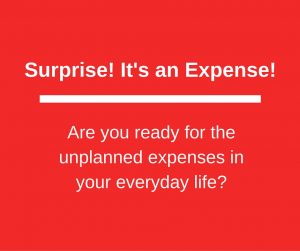