Every three months, I update my net worth calculations.  I used to calculate this every month, but I’ve found that spacing out the calculations makes the numbers more meaningful.  And since it takes a solid chunk of time to put it all together, it also makes things easier on me.

My last calculations were done at the beginning of January, when I showed a solid increase.  The previous quarter had shown a drop, so I was pleased to see the numbers go up.  I’ve been working hard on my budgeting and planning ahead for big purchases, so I hoped there would be a savings bump.

As I started to calculate the numbers, I quickly realized that I wasn’t going to see the increase I hoped for.  My savings accounts weren’t actually increasing like I hoped.  Thinking back on it, that makes perfect sense.  I had some big bills come due in February.  (I was somewhat ready for them, but I’m planning to be even more ready for them next February.)  So my cash accounts are actually down for this quarter.  But I am determined to have them increase next quarter.

My investments showed a drop.  This isn’t a surprise at all.  It’s how the market is moving.  For those new to my net worth calculations, my investments are mostly some mutual funds I’ve held for years, my retirement accounts, and a few individual stocks that I picked out for fun.  My retirement accounts grew slightly this quarter, but that’s only because I’m continuing to add funds.  The growth was not significant and didn’t equate to the amount I put in.  But my investments aren’t about the short term.  They’re about the long haul, so this drop doesn’t bother me.  The numbers will come back.

The only physical assets I track are my car and my house, and that’s because I have debt on both of them.  No real change in either of them, which is good.  Home prices in my neighborhood are increasing, which makes me happy.  I’m hoping that continues.  It’s never bad to have the area continuing to improve.

My outstanding credit card debt is lower.  I pay that off monthly, but it’s nice to see that I am generally spending less.  That makes sense – my January calculations likely still had Christmas expenses on them.

The saving grace in my net worth calculations is that I’m continuing to pay down my debt.  I pay my exact mortgage payment monthly, but on my car, I’m paying more than I need to in order to get that debt paid off quicker.  I would love to just be able to pay it off in one fell swoop, but that would require selling off a bunch of investments.

So my net worth change for this month is essentially zero.  Technically, it increased 0.04%, but we’ll round that to zero.  But I’m okay with this.  I’m making positive changes to my accounts and my investments will come back in time.

Do you track your net worth?  How are your numbers looking this quarter? 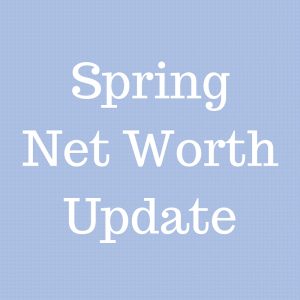