April!  Can you believe it!  We’ve made it through a full quarter of the year.  How is everyone’s budget looking?

(Don’t forget, Americans.  Tax returns are due this month.  Get on it.  No one wants to be standing in line at the post office the day the returns are due.)

Earlier this month (so, last week), a friend linked to a post talking about how much people need to save for retirement.  Someone my age (35) needs to have at least $1.8 million saved according to this calculation, and people up to 10 years younger need well over $2 million.

Those are some intense numbers.  And how in the world are you supposed to figure out how to get there?

I’ve found some pretty good calculators over time, but frequently, they ask for a lot of numbers I just don’t know. They want to know exactly what I will need to spend in retirement.  How am I supposed to know that?  I know what I spend now, but with inflation, how do I know what that means?  In general, I don’t want to retire before my house is paid off, so the plan is to need less money in retirement, but beyond that, who knows?

(No, they’re not compensating me for this – I just like the calculator.)

It asks some simple questions.

That last one’s the hardest one for me to answer, so I took a look at where my money is currently invested through my retirement accounts.  They’re probably somewhere between growth and aggressive growth.

The calculator takes those numbers and then gives you a score, estimating what you will have every month in retirement.  This does include Social Security, which is a little unnerving, since who knows if it will be there.

The best part?  You can then adjust the numbers.

“How about if I work another year?”

It’s amazing how those little changes make a huge difference.  The calculator claims to use estimates based on an underperforming market, which is promising.  The hope is that I would have even more available.  It also estimates that you will live til 93.  Given my family history, it’s not unreasonable to think I’ll be around after that.  So time to start saving more.

According to the calculator, I’m on track with my savings, but I’m right on the border.  Is it accurate?  Ask me in 30+ years.  But what it does is give you an estimate of where you are in your retirement planning and where you can make some changes to ensure that you’re in a great place when you do finally retire.

And if you can’t save quite as much as the calculator wants you to?  Well, do your best.  Put away what you can now.  The earlier you start saving, even if it’s only a small amount each month, the more time that money will have to grow while you’re working towards retirement. 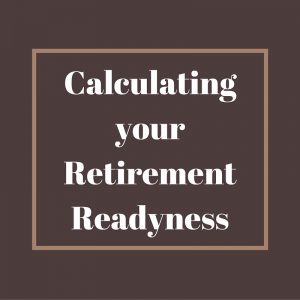