Over the past few weeks, I’ve noticed an interesting pattern in myself.  It used to be that I was so excited to open up YNAB to see how my budget was doing.  I was so proud of myself for staying in my budget categories and saving up for future expenses.

And that’s not good.  That’s decidedly not the way to budget.  It’s great that I’m tracking my expenses and it’s great that I have a budget.  These are all steps in the right direction.  But then I have to run my budget.  As my boss likes to say, you make a plan and you work the plan.

I’ve made a plan, but I’ve been avoiding working the plan.

I’m not what I would call a compulsive spender.  I know what I’m doing, and I don’t have to be doing it.  But I do sometimes think that I have an issue with willpower.  And when my life gets stressful, that willpower starts to fall by the wayside.  I start spending too much money in areas I shouldn’t be.  I ignore my healthy diet plans in favor of eating out more often (not good for the waistline or the budget).  And it simply isn’t good for me.

We’re in a new month now, and while I could say that my budget starts fresh, that’s not necessarily true.  Because I use YNAB,  I plan to “live on last month’s income.”  That means that all I have to spend in May is what I earned in April.

The problem is that I spent a lot of that in April as well.  I’m significantly underfunded for this month and will certainly be underfunded in June as well.  But I’m going to work to get back on track.  Every dollar helps.  I’m not at risk of being unable to pay for bills, thankfully.  Because I’ve been putting money away every month for some bigger bills that are still months away, there’s a nice cushion in my bank accounts.  But I can’t be relying on that, because if I do, what happens when those bills come due?  I need to be ready.

So now that it’s May, I’m recommitting to my budget.  I’m also recommitting to healthy eating, which isn’t cheap, but eating out hasn’t been cheap either.  I’m recommitting to putting myself first and finding fun in things other than spending money.  There is a lot of fun to be had in the city over the summers and much of it is free.  It’s most definitely time to take advantage of those opportunities. 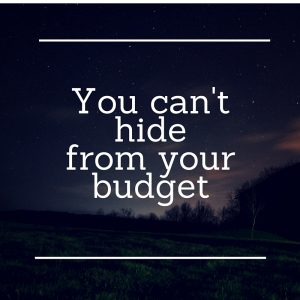