Saving money is tough, but it’s important.  And still, lots of us are struggling to save. We manage to make ends meet, we put away money for our retirements and we pay off our student loans.  But are we doing one of the most important financial tasks: saving for an emergency?

A recently released poll indicates that two-thirds of Americans would struggle to come up with $1000 for an emergency.  Well that makes sense, you think.  Plenty of people are either struggling to make ends meet with low paying jobs or they’re just not financially wise enough to have an emergency fund.  But that’s not the whole story.

What’s the reasoning behind this?  Conventional wisdom says you should have 3-6 months worth of expenses stashed away.  That number can be pretty daunting.  At one point, I definitely had 3 months set aside, but today, I’m not sure I do.  Is that high recommendation what keeps people from saving any money at all?

Are people just not worried about emergencies?  Do they figure they can cut back elsewhere if they suddenly need money?  Or do they simply think that they will put a surprise expense on a credit card (which is what many people end up doing)?  And let’s be honest, no one wants to think about an emergency fund.  It’s more fun to save up for a vacation or buy a new car.

Of course, that’s not to say that people aren’t trying.  The reason many people can’t come up with $1000 isn’t simply because they don’t care to set aside the money.  For many people, saving is a struggle.  The article quotes one person who talks about wages remaining flat while costs rise.  It’s tough when you don’t get a raise but your landlord still raises your rent.   It’s also true that people set aside money to fund a down payment on a house, and they deplete their savings when they purchase.

But whatever the reason, it’s worth it to try to build up an emergency fund.  If $1000 is too daunting, then aim for $500.  Even if you have a credit card and could put an emergency expense on a card.  You will have to pay it off, and why not do your best to reduce the amount of interest you pay.  Let’s say your hot water heater breaks and a new one costs you $1000.  You can put it on your credit card and pay it off slowly, paying a chunk of interest every month.  But if you have $500 set aside, you can pay off half of the bill and pay off the other half over the next few months.  You’ll still be making interest payments, but your payments will add up to that much less. 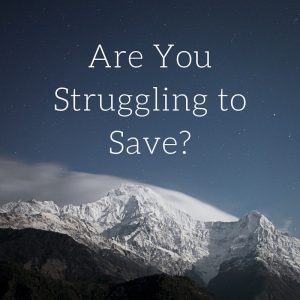