If you’re like me, you own your home and have insurance on it.  It makes sense.  What if a tree falls on the house during a storm?  What if there’s a fire?  Insurance is something you never want to need but something you always want to have.

But what if you rent your place?  Is renters insurance really worth it?  After all, the stuff you own isn’t worth all that much.

I had this very conversation with a friend of mine recently.  She was moving into a new place and decided to not get renters insurance because nothing she had was of any great value.  Her tv and furniture is all on the older side.  Sure, she’s got a closet full of clothes (and then some), but she doesn’t have fancy tastes, so none of it is very expensive.  She’s not really into jewelry or fancy electronics or anything like that.  So why bother to get renters insurance?

It’s easy to understand where she’s coming from, and you will hear a lot of people say the same thing.

But just think – if your apartment building catches fire and burns to the ground along with everything in it, where will you be?  You will only have the clothes on your back and maybe the junk that you forgot to take out of your car.  All those clothes you had might not have been expensive when you bought them, but replacing them’s going to cost a pretty penny.  The value of your stuff adds up really quickly, no matter how expensive your tastes.  And even if you can replace your entire wardrobe for $500, do you have $500 to spend on a new wardrobe right now?  Not to mention everything else that you lost.

But you think “Okay, what are the odds of that happening?  Apartment buildings don’t burn down.  And I’m smart, so I won’t catch my place on fire.”  Okay, even if that rings true, you’re still not looking at the whole picture.

Total loss isn’t the only reason to get insurance.  Another friend had a fire in her building.  Her unit was fine, but was significantly smoke damaged.  The whole place had to be gutted, repainted, re-carpeted, and all of her stuff had to be professionally cleaned.  You know what paid for that?  Insurance.

Renters insurance also covers liability issues.  This is an example I gave to my friend.  Let’s say I come over and while I’m there, I slip and fall and get injured.  I have to go to the hospital and end up with a big bill.  Of course, this is all charged to my insurance.  But my insurance company says “Hey, wait, you were at a friend’s house?  Well, we’re going to go after her to cover this because we don’t want to pay it all.”  Doesn’t matter what I say to the insurance company, that’s how they roll.  If she has insurance, her insurance company takes care of the whole issue, deals with the other insurance company, and she doesn’t have to worry.  If she doesn’t… that could be a big headache.

Finally, renters insurance can also cover your stuff when you’re not in your home.  Taking two big suitcases to the airport, only to never see them again?  Renters insurance may be able to help you recoup some costs, depending on your policy.

I’ve had renters insurance or homeowners insurance for well over ten years.  I’ve never had to file a claim.  But that doesn’t mean that I don’t still recommend it to everyone.  Play it safe. 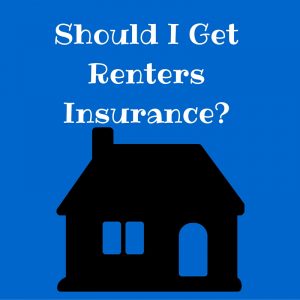