A few weeks ago, I talked about the importance of an emergency fund.

This past week, I got to use mine.

On Monday, Memorial Day, I was at home, getting some projects done in the house, and I noticed that it was getting pretty warm in the house.  I figured that it had something to do with the fact that I have the air conditioning set at a higher temperature during the day on weekdays since I’m not home.  I don’t want things too warm – after all, I do have pets in the house.  But when I checked the thermostat, I discovered that while it was set at 76, it was about 80 degrees in the house.  That wasn’t good.  So I walked outside, checked the AC.  It was running.  I checked the blower in the basement.  That was running too.  So I went back to the thermostat, dropped the temp 2 degrees and gave it 20 minutes.

The temperature actually went up.  So that’s not good.

I have a service contract with a local HVAC company, so I called, hoping they had techs available in the next 24 hours.  They didn’t, of course, but someone could come Wednesday afternoon.

A few days of a very warm house later, the tech showed up and I was so relieved to find out that I didn’t need a new air conditioner.  But I did need service that was going to cost me about $600.

Now, my budgeting hasn’t been great over the past month, so there wasn’t any extra money in my normal home maintenance budget to cover this, which meant hitting the emergency fund.  Which is, of course, exactly what it is for.  It was nice to have the money available and not have to worry about how I’m going to pay for the bill or having to risk paying credit card interest.

(Of course I put the payment on my credit card.  It’s all about the rewards!  If I have to pay $600 in unexpected repairs, I might as well get something out of it.  You know, other than just a fixed air conditioner.)

I transferred the funds out of my dedicated emergency fund account and into my normal spending account.  I like to keep my emergency fund totally separate so I’m not tempted to dive into it unless I really need to.  Now I just have to start paying the money back.

That’s right, just because I had the money doesn’t mean that everything is done.  No, now I need to replenish the funds in my emergency fund.  I’m not sure how long it will take, but it’s yet another reason to work on tightening up my budget.

So the point of this story is to remind you all of how important it is to have an emergency fund.  This was a small emergency, thankfully and didn’t put a huge dent in the fund.  And in the worst case scenario, I can live without air conditioning, though the coming months would have been a bit uncomfortable. 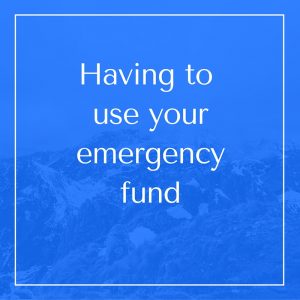