In trying to clean up my budget, one thing I’ve really worked to eliminate is eating out.  I’m lucky in that my office is in a great neighborhood with tons of great places to eat, but that means it’s often very tempting to run out and grab lunch.  While I can get something for cheap, I also have been trying to clean up my diet, and of course, the healthier options are also the more expensive ones.  It wasn’t too bad when I was limiting myself to once every other week, but it started to become 2-3 times a week, and at $12-$15 a pop, that’s not cheap.

I’m working to be better about bringing my lunch every day.  As part of cleaning up my diet, I’ve started to make lunch my big meal of the day.  With my schedule, it’s just easier, and then I’m not ravenous when I get home from work.

I thought I was doing a decent job of saving money by bringing my lunch, but looking at my budget numbers, I’m not so sure the savings is as great as I thought.  I’ve started sporadically using services like Blue Apron and Hello Fresh for meals, and they’re not cheap.  I don’t use them every week, maybe twice a month.  I love the variety, that’s for sure. It makes bringing my lunch a lot more fun and makes eating out a lot less tempting.  But when I crunch the numbers, I’m still paying $10-$12 per meal.  That’s… not awesome savings.   And last month, I used those services three times!  No wonder my budget looks rough.

I’ve also found a great service here that delivers a farm box to your house.  It’s more expensive than going to a Farmer’s Market, but there, I have crunched the numbers and decided that the convenience fee is worth it to me.  So I’m eating a lot more fresh produce, which is awesome for my health… but still rough on the budget.

My goal is to really lower the food spending numbers this month.  I haven’t eaten out at all this month, so thumbs up for me on that category.  But I did buy a few bottles of wine (I don’t drink much, but I like to keep nice wine around to take to friends’ houses or just to be able to open when guests are here, and I was down to my last bottle) and did my quarterly coffee bulk purchase, so those are two huge dents in the food budget.

It’s definitely a tough balance trying to eat as healthfully as possible while still keeping the budget reasonable.  I’m also currently training for a half-ironman triathlon, so I need more calories than normal.  It’s so tempting to fill up with inexpensive carbs, but I know that quality foods are so much better for me and I’m lucky I have the room in my budget for them.

But man, that grocery budget feels like it’s just blinking big red numbers at me right now.  Time to work on cutting back on those food costs and be a better sale shopper. 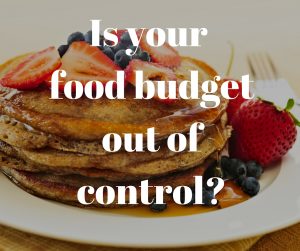