If you have paid any attention to the news lately, you have heard the word “Brexit.”  And in the US and elsewhere, people are panicking about what it means for them.

First off, a quick discussion about Brexit.  Brexit is a portmanteau (two words blended into one) of Britain and Exit.  In a nutshell, a majority (though a small one at that) of UK citizens have voted that the United Kingdom should leave the European Union.  This has significant consequences for UK citizens as well as EU citizens working in the UK.  It is a very big deal, and there are a lot of questions left to be answered.

But what does it mean for those of us over in North America?

Well, if you pay attention to the markets, you’ll know that the stock market took a hit.  Why?  Uncertainty.  People aren’t sure what’s going to happen next.  Will the EU crumble if the UK leaves?  What does this mean for global trade?  In times of uncertainty, investors panic and put their funds into safer options.  So is that what you should do?

In my opinion (as a non-professional in the industry), unless you are planning to retire soon, no.  For most of us, investments are long-term.  The markets go up and down, but in general, the numbers trend upwards over the long haul.  So sit tight.

When people pull their money out of stocks, they aren’t just sticking it under their mattresses.  They’re investing in safer options like CDs and bonds.  With more people wanting to invest, expect those rates to drop.   Kind of a bummer for people like me who rely on CD ladders for savings.

But if you’re looking to buy a house or refinance your mortgage, this could be good news!  When US Treasury bonds drop, so do mortgage rates (usually).   So if you’ve been thinking about refinancing, this might be your time.

Thinking about traveling?  Now’s not a bad time to book a trip to the UK!  Yes, they are going through some uncertainty, but it’s a political uncertainty, and not the sort that should make you want to stay home.  Unfortunately for Brits, after the vote, the Pound dropped significantly against the US Dollar.  That basically means that the US Dollar now buys more in the UK than it would have a month ago.

But is it wrong to take advantage of the plight of another nation?  Well, regardless of the value of the Pound, the tourism industry still needs your dollars.  They don’t care what it’s worth to you in your nation, they care what it’s worth to them in theirs.  When the US dollar was low, foreign tourism was up because people could do more with their money and it was great for the tourism industry.  Check out other EU countries too, because the uncertainty has caused a lot of rates to drop against the US dollar.

And if you are a UK or EU citizen reading this, I’m sorry for what you’re going through.  It’s clear that this was not an easy vote and the next few years could be very tumultuous for you.  But whatever happens next, this too shall pass. 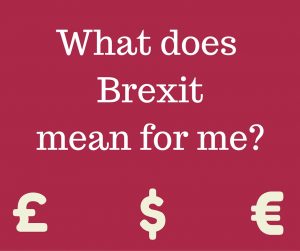