For me, July is a glorious month?  Why?  Because July is a rare three paycheck month.

I am paid every other week.  Typically, that means two paychecks a month, but with 12 months in a year and 26 paychecks, two months out of the year, I get three paychecks.  Since I use the YNAB method, I budget on last month’s income, which means that I’m typically budgeting with only two paychecks, but in August, I will get to budget with three.  What in the world will I do with all of that money?

It’s so very easy to just think “Okay, extra money coming in!  Time to splurge.”  Or maybe I don’t splurge, but I think “Hey, I’ve wanted that $100 item for a while, maybe now is the time to get it.”

This extra paycheck is coming at a good time though.  My budget has been a little tight due to overspending.  This is a good chance for me to get back on track and put a little more money into some of my budget categories for future spending.

I also just received my property tax assessment for the year.  I knew it was going up this year, but I wasn’t sure the full amount.  I made a guess and have been budgeting monthly to hit that amount by December.  Turns out my estimate was low, but by less than $200.  So I can pop an extra $200 into that savings account and then continue with my automatic savings plan for that bill.

I discovered a small home repair issue that needs to be taken care of, one that I can’t DIY and that I probably shouldn’t put off.  That’s going to cost a pretty penny.

Finally, it’s July.  It’s hot.  I always joke that I will freeze in the winter so that I have more money to spend on staying cool in the summer.  I hate sleeping in the hot weather and love my air conditioning.  Yes, I could save money by bumping up the thermostat, but I’ve found a comfortable point and I’m happy with it.  But with the heat we’re having, my electric bill is going to be high next month.

So as you can see, this bonus money is quickly disappearing.  In fact, once I do some padding of my budget categories for upcoming expenses, there might not be much left.  I do plan to put some of it into savings, but I would love to get back to the days where those “bonus” paychecks went straight into the savings account.  My expenses are just higher than they used to be with home ownership.

Okay, so maybe I’ll splurge a little.  I’ve gotten back into fountain pens after a hiatus, and I would love to pick up a new bottle of ink or two.  They’re only about $20, but I’ve been putting it off because I haven’t had the disposable income to drop.  Maybe now I can get at least one of them.  Like I always say, don’t forget to treat yourself every so often.

How do you spend extra money that comes your way? 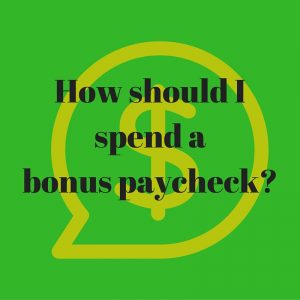