Even though I write for a personal finance blog, I don’t often talk to my friends about money.  It’s an awkward situation.  I have a few friends who I discuss finances with, but we’re in similar financial situations and have similar perspectives on spending and saving.  It’s different with friends in different financial situations.

I have to be honest, it can be tough sometimes.  I have very clear opinions on the best ways to manage your money.  (Otherwise, why would I be writing for a personal finance blog?)  I think that credit card debt isn’t a great thing and should be paid down as much as possible.  I think that financial splurges are a good thing, but you still have to be careful about how you splurge.  I think spending within your means is hugely important.

Now don’t get me wrong – in general, I’m not judgmental about how you spend your money.  If you’re paying your bills and not accumulating debt, the places where you spend your extra money is up to you.  For example, I am a triathlete.  I have a stupidly expensive bike and spend a stupid amount of money on races.  But it’s my money and it’s what makes me happy.  I have a friend who is a huge fountain pen collector and has pens worth more than my stupidly expensive bike.  But they make him happy, so it’s all good.  Another friend is big into a particular band and travels all the time to see them.  Awesome choice.

But this assumes you have the extra money to spend.

I have two friends in particular who I just see making terrible financial choices, and there’s only so much that I can do.

This past week, I went to lunch with a friend who was telling me all about her plan to get out of debt.  Her credit score is pretty bad, but she’s determined to fix it, most notably by paying her bills on time.  I support this plan.  I think the plan is going to take longer than she thinks, but it’s a good idea.

Then she shows me the $400 purse she just bought at the mall because she deserved a treat.

Now.  I’m all for financial splurges, but you have to be reasonable about things.  If you’re trying to get out of debt, perhaps splurging on something for $400 is a bit much.  Perhaps a $40 splurge would have been better.  But I didn’t want to come off as judgmental, so I just said “That looks like it will last you a long time!”  (It was a super cute purse, but still…)

Another friend has decided that she has hit the age where she should be purchasing a home.  (Note – I do not think this age exists.  If you want to be a home owner, go for it.  If you want to rent, go for it.  Each has perks.)  But her opinions on what she thinks she can afford and what she can actually afford are pretty far apart.  She also doesn’t want to listen to what owning a home actually costs.  Unfortunately, it’s not just a mortgage.  But again, I can only do so much.  She’s seen me go through repair costs and heard me say “I can’t afford to do that because I had to just pay for X on my house.”  So I just advise carefully and if I see her starting to go in a bad financial direction (right now, it’s just plans), I may speak a little more loudly.

Talking to friends about money can be very tough.  You have to know when to speak up and when to hold back.  And just try to educate with what you have learned along the way.  Not everyone spends their free time reading financial blogs, after all! 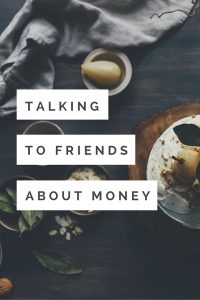