Earlier this summer, I talked about having to use my emergency fund.  Thankfully, it was only a hit of about $600, which I replenished thanks to June being a three paycheck month.

Then, as I was cleaning out my home office a week or so ago, I found something weird.  The leg of my desk was water damaged.  That’s unusual.  So I pulled the desk away from the wall and discovered that the drywall and the baseboards were also water damaged.

This is an outside wall of a small addition to the house, and I know there are no pipes running through the wall so there was one clear source of the leak.  The outside.  How that water is getting in, I do not know, but it was time to call in the experts.

Unfortunately, a small water leak can easily become a big problem.  Why?  Mold.  I don’t know yet if there is mold in my walls, but I will find out this week when a mold abatement company comes out to do their work.  I also have to have the source of the leak repaired.

So needless to say, my emergency fund is taking a big hit.  But that’s what the money is there for.  Unfortunately, it’s going to take me some time to get the fund replenished, but clearly it’s important that the money is there for my use.  Recently, a friend had to have $400 worth of repairs done to her home and was lamenting how she was going to have to put it on her credit card.  While that’s always an option, it’s certainly not a good option.

Do you have an emergency fund?  And how much should you have in it?

Conventional wisdom says you should have three to six months worth of normal expenses in your emergency fund.  Not income, expenses.  How much do you need to live per month?  Then you’re covered in case you are suddenly out of work unexpectedly for a few months, which may seem unlikely, but it also means you have money there if your car breaks down or you suddenly discover a leak in your house.

I admit, the idea of setting aside 6 months worth of expenses sounds unfathomable.  Where in the world is the average person supposed to find that kind of money, especially if you’re trying to pay off debt.  And right now, experts aren’t really in agreement on which is more important.  Some say that you should pay down your debt first.  Others say that you should make sure you have an emergency fund.  I don’t know what the answer is, but I do see the logic in paying down your credit cards and hoping that you don’t need the emergency fund.  Worst case, you put the money on that credit card you’ve just paid down, but at least you were paying less interest for a while?  It’s a tough decision and one you should make for yourself.

I’m going to have to do some real work to get my emergency fund back into shape.  I’ve been in my house a little over 5 years, and there are some things that were done to get the house sold that are now starting to show themselves as having not been done properly (such as the reason for this leak), and it’s likely this isn’t the only repair I’m going to have to have done in the near future. 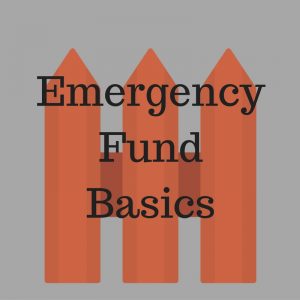