When it rains, it pours.  And sometimes that water gets into your house and does some significant damage.

So the home repairs I mentioned in last week’s post have not been going well.  When the contractors opened up the wall, we all realized that the issue was much worse than anyone expected.  Much, much worse.

Thankfully, the contractors I had so carefully vetted can do the work, but I won’t get the new estimate until sometime today.  At this point, I’m not going to look around to see if I can get the work done for cheaper.  While that is typically the smart thing to do, time is also money and at this point, I just need the repairs complete.  I have found two companies that have good reputations, that others have recommended, and who have made a good impression on me.  That’s what counts.

(And for anyone thinking that the company under bid the work, trying to get me on the hook, that’s not the case at all.  We all thought the water was coming in at one spot, based on the interior damage.  No one anticipated that the real issue was improperly installed siding letting water in at a totally different spot.)

I’m not sure yet what this is going to cost, but it’s possible the estimate could total 4 times what I initially budgeted for the two companies.  Some of this is because I’m going overboard.  Rather than just repair the siding issues, I’m having completely new siding installed.  After all, if it was improperly installed in the first place, who knows what else might be going on under there.  I’m also having new gutters installed.  This was something I knew I needed eventually, and they are contributing to the issues, so I’m just having it all fixed at once.

Now to figure out how to pay for this.  My emergency fund isn’t as large as it could be, so it’s entirely possible that it won’t cover the total cost.  I do also have some money in savings that I could pull from.  I don’t love that, but it’s an option.  Worst case, I have some investments that could be sold.  I invest for the long term, not the short term, but the option is there if I need it.

But I’m in a pretty decent situation.  I’m going to have to do some real work to replenish my accounts, but I think I can do it.  What if you’re faced with this and don’t have the money available?

One option that a lot of people default to is credit cards.  Unless you have a zero percent interest card and can pay off the full bill before the interest starts to accrue, this is a terrible idea.   (Though putting the cost on a rewards credit card and then paying it off in full when the credit card bill arrives isn’t a bad plan.)

Someone asked me if I had thought about a home equity loan.  While I do have a good amount of equity in my house, partially thanks to rising home prices, it’s just not something I want to mess with, but it’s definitely an option, especially when it comes to home improvement costs.  However, there are fees that come along with that, so it’s probably really only a good idea when you’re doing something big to your house.

The worst plan is taking money out of your retirement plan to pay for home repairs.  Do whatever you can to prevent this.

Finally, the obvious answer.  Talk to the contractor about a payment plan.  You never know what they will say.  Maybe you can make a solid down payment and then pay the remainder in installments.  It never hurts to ask.

So for now, I’m just waiting to see how bad this estimate will be and when we can get the work scheduled.  I keep telling myself that it won’t be that bad and that it’s just money.  I can repay myself with some hard work and determination. 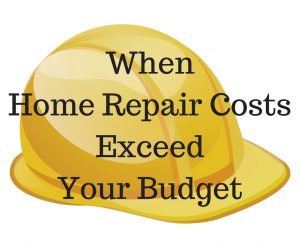