“Use It Up, Wear It Out, Make It Do, or Do Without.”  This was a phrase often heard during the Great Depression.  Times were incredibly hard and everything had to be used to its fullest.  Nothing was wasted because people couldn’t afford to waste.  So they came up with all sorts of creative ways to reuse things.

Now, I’m not saying we should all go back to Depression-style living.  While I could potentially sew my own clothes, it’s better for everyone if I just buy them, for example.  And well… I’m probably not going to darn my socks.  If I wear a hole in a sock, it’s getting tossed.  (Actually, it’s probably getting used as a cleaning rag – a sock on your hand is awesome for dusting window blinds.)

I know that I could be less wasteful, however.  I’m trying to be better about regular cooking, but sometimes, leftovers just end up going to waste.  I know right now, there is some cooked eggplant in my fridge that I just didn’t like, and it’s going to end up getting thrown away.  There are also some green beans that have seen better days.  I also have to do regular clean-outs of the pantry and end up tossing things that have expired.  I should be better about preventing this.  Instead of just shopping, I should plan out my meals and take stock of what I have.

I’m also well aware that I simply have too much stuff.  One strange example is my collection of body washes.  I buy them when they go on good sale, but I only shower once a day!  I don’t need this much body wash!  Of course, I’m not going to throw it out, but I should definitely stop buying more and actually use it up.  I think a lot of people have things like this – some particular consumable item that you have way too much of and yet you keep accumulating more.

I’m also bad about cleaning products.  I have a whole bin of cleaning products in the linen closet, yet I’m always trying something new instead of using up what I have.  Or just going back to the old standards like vinegar and water, which work better than many products.

“Do Without” is a big one that I think a lot of us forget.  We live in a society with such easy access to things.  If I want something, I can go to my computer, click a few buttons, and in a few days, it arrives at my house.  Obviously, I try to be careful about my shopping, but it’s all too easy to think “Oh, I need X for the house, might as well just order it!”  In some instances, this is awesome.  Fewer trips to the store, only getting the one thing I need instead of that thing plus four other things.  But at the same time, it’s too easy to just click “Order now” instead of deciding whether or not it’s something I actually need.

So for the next month, I’m going to actively remind myself of this phrase and see where I can be saving more in my life.  Little things do add up, after all. 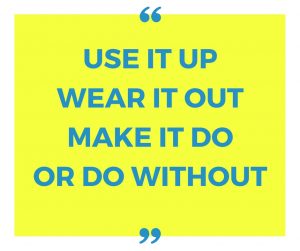