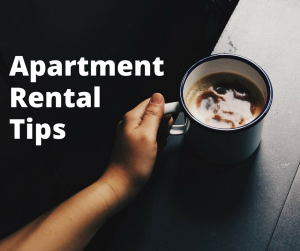 Two friends of mine are in the process of looking for a new apartment to rent.  They’ve been living in a place owned by some family friends, but they’re looking to find a place closer to their respective jobs, so they’re currently hunting for a good apartment that meets all of their needs.

Here are a few things that I learned or that I wish I had known when I was renting my first apartment.

First off, figure out the bottom line.  Use rent reports local to your area, like this example from Pittsburgh, to understand what the apartment cost you in total? Lots of places seem to be breaking apart their total fees.  So you pay one amount in rent, plus an amenities fee, plus a pet fee, plus a parking fee.  On one hand, this is nice. If you don’t have pets, you don’t want to pay more.  And you don’t want to pay for a parking spot you will never use.  On the other hand, even if the state laws say that your apartment rent can only go up by a certain percent each year, that doesn’t mean those additional fees can’t be raised.

For example, when I first moved into my apartment, I had to pay rent plus a pet fee.  Amenities (a gym and an outdoor pool that was kind of gross) were all included.  Parking was also included.  My roommate and I had a two bedroom apartment so we could have two parking spaces.  A few years after we moved in, policies changed.  Our rent had been going up every year, but we just dealt with it.  Then one year, they announced a new policy.  Parking spaces were no longer included, and we would be paying monthly for them.  The first parking space was going to cost $100 a month and the second parking space was going to be an additional $150.  In addition to the $100 a month increase in our rent, we were now having to pay an extra $250 a month.  This was a huge percentage increase, but it was legal because it was in fees.

Of course, there wasn’t much we could do about this when it happened, but it would have been helpful to have been aware of the possibility.  We probably would have been better off renting somewhere that already had parking fees.  Even if those had increased, it likely wouldn’t have been a sudden $250 a month increase.

It’s also important to know the general policies in your apartment building before you sign on the line.  For example, some have required cable companies that you have to use because the wiring is already hooked up.  This isn’t a problem if they use one of the major companies, but when I was apartment hunting, the required cable company was definitely the lesser of those available in the area, and the service wasn’t known for being great.

What are the heating and cooling policies in the building?  I know that sounds crazy, but in a lot of buildings, they either have the heat turned on or the air conditioning.  That means that in the spring and the fall, you can have quite a few uncomfortable days before the switch is made.  I remember a few really hot evenings in the spring when the weather got warm but the apartment complex wasn’t quite ready to turn on the AC.  At least on the cool nights in early fall, we could just bundle up a bit more.

What are the rent payment policies?  Do they require a check or direct debit?  Where do you pay the rent?  What is the penalty if you are late?  While it’s important to always pay your rent on time, sometimes things happen, and it’s good to know what your grace period is.  If it’s a place that insists your rent is late if it’s not in by the first of every month, you might want to consider looking elsewhere.  I definitely lost track of time more than one and didn’t get my rent in until the second or third.  It’s not good personal finance keeping, I know, but it happens.  A couple of days for a grace period is definitely nice to have.

Finally, before you sign on the dotted line, be sure that you see the actual unit you’re renting, not just a unit available for showing.  You might find that it’s located near a noisy stairwell or that the windows look directly into another building.