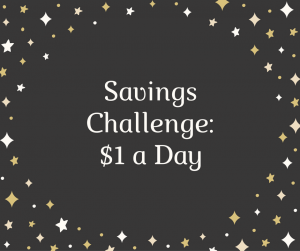 When I first started my personal finance blog oh so many years ago, it was called A Dollar A Day.  I had decided to do a money challenge and spend all of 2008 putting away a single dollar every day.  I put it into a high yield savings account (back in those days, the rates were pretty darn good).  It was pretty exciting to watch the money add up and see all the interest I was earning.  By the end of the year, I had $371.22.   (Oh, how I miss those interest rates.)

At the end of the year, I took all of that money and invested it.  I did a bit of research and picked a stop.  I am a fan of the “set it and forget it” style of investing, so my money’s been riding in investments since then.

I actually hadn’t done the math on this specific investment until today (I tend to look at my portfolio as a whole) and well, I’m pretty impressed.  By saving a dollar a day for a single year, then investing, I’ve more than tripled my money.  Of course, this is growth over more than 7 years.  And some of that has to do with the stock I picked.  (No, I’m not going to reveal that – not because it’s some secret but because I’m not a financial advisor and I don’t want someone telling me that I picked a terrible stock for them.)  I’m sure some stocks have grown significantly more, others have most certainly tanked.

That’s a pretty big number to look at.

Of course, who’s to say that I would have actually saved all of that money.  Maybe at the end of the year, I would have chosen to spend it on something.  I have made some pretty big purchases since 2008, most notably my house.  That $3200 would also have made a nice dent in my car payments.

So maybe it’s time to start up the “Dollar a Day” project again, and maybe this year, you’ll join me.  Setting aside a dollar every day is a pretty easy task.  And you can do it however works best for you.  Maybe you put a dollar bill into a jar every day.  Maybe you do it weekly.  Maybe you’re not a cash person, so at the end of every month, you transfer $28-$31 into a special savings account.  However you do it, set aside that dollar, and think about how you will use that $365 at the end of the year.  Sure, maybe $365 doesn’t seem like much, but when saving it is essentially painless, how can you turn down the opportunity?

Try it.  Save a dollar a day.  Maybe by mid-year, you’ll find that saving $1 is so painless that you want to try to up it to $2.  Maybe you have a tight month where you can only save $1 on half of the days.  That’s okay too.  Make this project work for you.