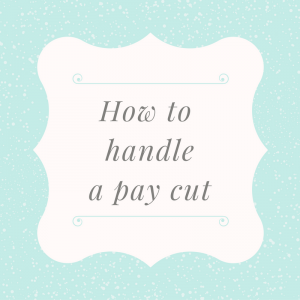 This week, some bad news started circulating at my job.  There’s a slight possibility we’re all facing a pay cut in the next year or so.  And not a small pay cut – probably around 20%.  Now, this may or may not happen. But it’s got everyone thinking.  What will we do if this pay cut actually happens.

Losing 20% of your income is a pretty big hit.  Of course, it’s better than unemployment, so I can’t complain too much.  That said, I will have to figure out how to handle my finances.  I would love to say “Oh, I put much more than that away in savings every month, so I will just save a bit less.”  How wonderful that would be.

I can’t even say that my emergency fund will cover me for two reasons.  Number one, an emergency fund is designed to be a temporary solution.  It covers you in case of a period of temporary unemployment or in case of emergencies.  Not if your job starts paying you less.  And number two, my emergency fund took a huge hit last year with my house repairs, and I’ve just started rebuilding it.

So let’s review my options.  The obvious solution appears to be getting a new job or picking up a second job.  Both of those will be challenging options, however, as my employer’s pretty darn large in this area, so everyone will be looking at those possibilities.  Doesn’t mean I can’t try, but it may not be the most likely option.

I could also try to pick up more freelance writing work.  It’s not huge, but it would be something to do.  I’ve also got skills such that I could tutor or give music lessons, but again, with lots of smart and talented people in the area taking pay cuts, that might not be the best way to go.

The clear winner is going to be to cut expenses.  I admit, it’s time for me to take a hard look at my budget again and trim the fat, regardless of my future pay.  Some of my budget categories are creeping up again and I should take a good hard look at where my money really is going.  The area where I seem to be struggling right now is dining out.  Life was so busy in November and December, so this month, I’ve already been out to eat three times with different friends.  It’s totally worth it to catch up, but I should maybe try to spread out those opportunities, or at least choose slightly less expensive places.  Not that we were going for the most expensive places, of course, but perhaps going for sandwiches instead of a big meal would be a better plan.

One big easy cut would be my lawn care service.  It’s my big splurge and I know it.  But I loathe doing lawn work and so it’s worth it to me to have less spending money and more free time on the weekends.  That said, I could very easily drop that from my expenses and suck it up and just do my own lawn work.

There are also expenses in my budget that I don’t want to cut, but if it comes down to it, I certainly could.  I definitely don’t need a Hulu subscription.  It’s what replaces my cable TV, and it’s not that pricey, but if I have to start truly counting my pennies, that can go.  I suppose technically, my entire internet subscription could go.  I’m pretty sure I would cut just about everything else before I cut that though!  Oh how reliant we become on technology.  I’m absolutely old enough to remember the days without the internet – and yet I sometimes wonder how we did things without it.

I could also really cut my grocery budget, which is something I’m currently working on and will likely write about sometime over the next few months.

Of course, none of these get me to a complete replacement of 20% of my income. So there would have to be some very serious consideration of where my money is going and where it really absolutely needs to go.

Let’s hope that I don’t have to make these decisions.  But it’s definitely a good experiment and it’s never bad to try to save a bit more as I wait to see what’s going to happen.