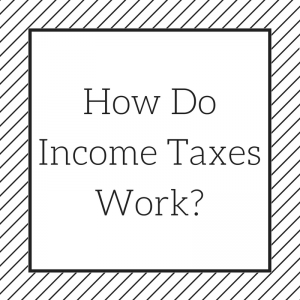 Happy Tax Day!  Because April 15 fell on a Saturday this year, US tax returns weren’t due until April 17th.  But why do we pay our taxes on April 15?  And while we’re talking about it, how do income taxes work anyway?

Federal income taxes were created by the 16th Amendment to the Constitution, which says “The Congress shall have power to lay and collect taxes on incomes, from whatever source derived, without apportionment among the several States, and without regard to any census or enumeration.”  The first Tax Day was March 1, 1914, about a year after the 16th Amendment was enacted.  In 1918, it was pushed back to March 15, and then in 1955, to April 15.  The official reason given was to spread out the workload of the IRS employees.  [Source] Nowadays, many returns are processed electronically, but I can only imagine the amount of work when everyone had to mail in their tax returns. Just imagine all of that paperwork! It’s a good thing that these advancements in technology have made it easier to file taxes online for free.

Of course, I’m sure tax returns were also a bit simpler in the 1950’s.  After all, technology and the internet has made banking, investing, and even working much different.  And Americans are apparently very confused about how the US tax code works.  I read an article over the weekend that said that more than half of US taxpayers can’t answer very basic questions about income taxes.  For example, “If you lend money to a friend and she doesn’t pay you back, can you write it off?”  There are conditions and paperwork involved, but in short, yes, you can.  Who knew?

The US began withholding income tax from paychecks during World War II to ensure a steady influx of cash to support the war effort.  [Source]   The amount withheld is determined by your W-4 form, where you add up your allowances based upon some simple questions (single or married, any dependents, etc).  Unfortunately, it’s not a perfect system.  For example, it doesn’t ask you if you own a home and pay a mortgage.  I get a tax deduction both for my mortgage interest and for my property tax, and that means I owe the government less than I did while I was a renter.

There are various calculators online that you can use to figure out how much income tax you should be paying, and thus, how many allowances you should have withheld from your paycheck.  I personally like the calculator created by the IRS.  You can change your W-4 at any time throughout the year.  So if you discover in September that you’ve been having way too much money withheld, you can change your W-4 so that you get more money in each paycheck.

When you file your taxes each April, you’re doing the paperwork to figure out if you owe the government money or if they owe you money.  You calculate all of your income and all of your various deductions, and the number at the end is the difference between what you paid and what you should have paid.  Most people want to get a big refund from the government.  I’ve even heard it referred to as free money.  No!  This is your money that you let the government use for free.  The best tax return is one where your final balance is as close to zero as possible.

My tax return this year was not close to zero, so I’m going to use the IRS’s calculator to make sure that I’m not giving the government a large free loan every year.  I admit, I look at these calculators and think that I would prefer to not do the paperwork.  But I would also like a larger paycheck every payday.