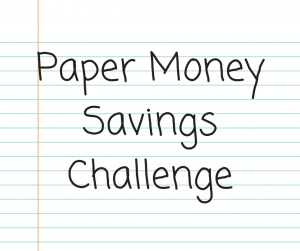 Are you still hunting for a good savings challenge?  Do you use cash regularly?  Then do I have a challenge for you!  Check out The Paper Money Savings Challenge.

This is a pretty simple way to save.  Pick a denomination of paper money.  The common denomination to pick is one dollar, but some people choose $5 or $10.  For this example, I’m going to use the $1 bill.

Every time I go shopping, I pay in cash.  But when I get change, I take all the $1 bills I have received back and put them in a separate part of my wallet.  If I go to another store, I don’t spend those $1 bills.  When I get home, every $1 bill that I have gets put in a jar, envelope, or box.  After a while, I will have a decent amount of money set aside.

Choosing which denomination to target for The Paper Money Savings Challenge is probably the hardest part of the challenge.  If you choose $1, you probably won’t notice the dent in your spending money quite as much, but you’re also saving quite a bit less, so it will take longer to accumulate a substantial amount of money.  That said, it’s not a bad place to start, and it will probably be fun to watch the cash accumulate in your savings stash.  A big pile of $1 bills looks pretty impressive!

If you pick $10, you will certainly notice the dent in your spending money.  The big question here is how many $10 bills you get in your change.  If you don’t find that you have that many, you won’t end up saving all that much.

I think $5 is a good balance of the two.  It’s not uncommon to get a $5 in change.  You will notice the missing cash in your spending money, but that’s not a bad thing.  And the savings will add up a bit more quickly as well.

Unlike some of the other savings challenges I have discussed recently, this one doesn’t give you a set amount of money at the end of the savings period.  That’s both good and bad.  If you’re saving up for something and need a specific amount of money by a certain time, this probably isn’t the best challenge to help you meet your goals.  But you also aren’t pressured to save.  Is money tight this week?  Well, you’re probably not going out and spending money, so you also won’t be pulling money out of your wallet to put into savings.

One very easy pitfall to end up in is letting that jar, box, or envelope of cash taunt you.  It’s just sitting right there.  Instead of going to the ATM to get cash, it’s so tempting to just pull out of the box.  Maybe you need to pay the pizza guy or give your kids their weekly allowance.  Do not let the temptation get to you!  Do not touch the money in the savings pot.  And make sure that you are keeping it safe.  A cache of cash just sitting around is a thief’s greatest dream.