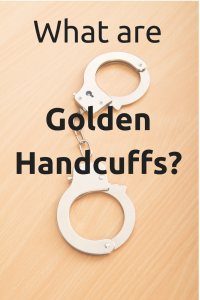 While I was in law school, a common topic of conversation was paying off the education debt most of us were currently accruing.  For a number of people, the plan was to take a high-paying job, even though the work wasn’t what they wanted, pay off the debt early, and then go do their desired type of work.  Frequently, these were people who wanted to work for non-profits, public defenders, etc.  Awesome careers, but not the most high paying jobs.

The problem, as one professor called it, was that those high-paying jobs came with golden handcuffs.  Yes, you might be working 80 hours a week, but think about the money that was coming in!  Once you got those loans paid off, think of all the great things that money could do.  You could buy a fabulous house.  You could buy a fancy car.  You could hire someone to clean your house for you (you certainly weren’t doing it after spending 80 hours working that week).  You could go on expensive vacations, assuming you could get away from the office.

So what if the work was soul-sucking?  You had money!  You weren’t going to quit that job and go do something that paid less.  And thus, golden handcuffs.

Of course, if you’re in a dire financial situation, getting a higher paying job is sometimes the best way out. But you can’t let the paycheck be the only reason you’re doing the job.

Let’s be honest.  No one has a job that they love every hour of every day.  Sure, in general, I love my job.  But there are parts of it I would love to outsource.  And some mornings, I don’t want to get out of bed, not because I don’t want to go to work, but because my bed is warm and comfy.  But you should try to find a job you enjoy at least some of the time.  Even if it’s just because you have great coworkers.

If you do find a job that is better paying, be smart about what you do with your money.  Use the added income to pay down your debts, plan for retirement, then start thinking about improvements to your life.  Don’t immediately use a bigger paycheck as an excuse for a nicer car or a bigger apartment.  Do you really need to add all those cable channels or hire that lawn service?  Make smart improvements, and don’t just lock yourself in to a more expensive lifestyle.

I admit, I find myself looking at the pay scale at my office and dreaming about what I could do if I got a promotion. But I have made a decision not to apply for just any job with better pay, even if I qualify.  I want work that I enjoy as well as a paycheck that lets me live a good life.  It’s about finding the balance between the two.

A resume plays the most important part in your dream to get a high paying job. So, you should take utmost care while crafting your resume, taking account of every single detail. Linguistic Mistakes are some of the most common executive resume mistakes that deflate your resume. Make sure you avoid them at all costs.

(As an aside, another solution to the golden handcuffs problem would be to not go into significant school debt in the first place.  I went to the school that gave me the most scholarship money, knowing that the career I wanted would never be high paying.  This meant not going to a school with bigger name recognition.  I have never regretted that decision.)