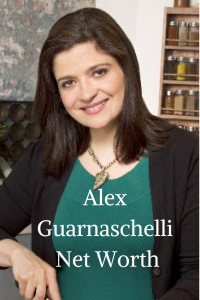 Alex Guarnaschelli is a world renowned chef who began her education by cooking with her mother, a cookbook editor, in the kitchen.  After years of study in Paris, New York, and Los Angeles, she became the Executive Chef at Butter in New York City.  But Alex Guarnaschelli had higher aspirations and in 2007, appeared on The Food Network for the first time, beating Cat Cora on Iron Chef America.  Food Network clearly liked what they saw, as she was given her own show on the network the next year.  Alex Guarnaschelli later competed on The Next Iron Chef, and The Next Iron Chef: Redemption, which she won, earning her the title of Iron Chef.  She is now seen as a judge on Food Network Challenge and Chopped, and has also written two cookbooks.

But what about Alex Guarnaschelli’s net worth?  How lucrative is this business?

Well, it’s not as lucrative as you might think, though she does live quite comfortably.  Alex Guarnaschelli’s net worth is around $2 million dollars.  The average annual salary of an executive chef in New York City is around $73,000, though Alex likely makes a bit more due to her celebrity status and the popularity of her restaurant.  Her celebrity appearances certainly help her build her net worth, and allow her to live a relatively comfortable lifestyle in New York with her young daughter.  More importantly, she has been able to live her passion and cook while still building a comfortable net worth.  Way to go, Alex!