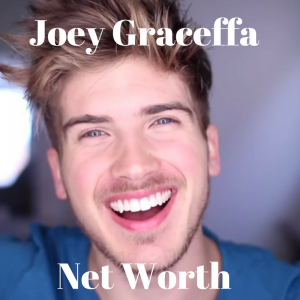 In this week’s edition of Celebrity Facts, I’m taking a look at Joey Graceffa’s Net Worth.   Joey Graceffa is an interesting figure to analyze because he’s pretty much a self-made man, building his business on his successful YouTube channel.  But before we get to Joey Graceffa’s net worth, let’s take a look at the man himself.

Joey Graceffa is 26 years old, and at only 16, he started uploading his first YouTube videos.  By 18, he had started one of his two current YouTube channels, posting daily vlogs.  His personality and sense of humor have allowed him to build up a following of over 8 million subscribers.  He also runs a video gaming channel with an additional 2.2 million subscribers.  He has over a billion views on YouTube!

Thanks to his YouTube success, Joey competed on two different seasons of The Amazing Race, and though he didn’t win, this was excellent exposure for his YouTube channel (as well as a boost to his net worth).

Joey has dabbled in acting with roles in a few different web series, and in 2015, he released a memoir about his life and how he came to accept himself for who he is.  He and another author have also written two young adult novels (the second to be released later this year).

As you can see, Joey Graceffa is a very hard working young man.  He has a number of different sources of income and is always working to grow his business, his celebrity, and his bottom line.  His YouTube channel is estimated to make him at least $350,000 a year!  He puts in a lot of hard work, and that hard work is clearly paying off.

With all of Joey Graceffa’s income sources, as well as his years active in the business, Joey Graceffa’s net worth is estimated to be around $4 million.  Not bad for a 26-year-old with many opportunities headed his way!