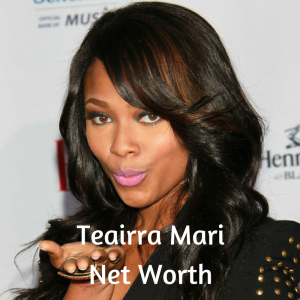 Continuing down the path of celebrity net worth, let’s take a look at someone in the music industry.  What is Teairra Marí’s net worth?

At just under 30 years old, Teairra Marí has already had an interesting career.  She comes from music royalty – her grandmother sang backup for Aretha Franklin.  I know what you’re thinking, is singing backup really that big of a deal?  You better believe it is!  You don’t get to sing backup for Ms. Aretha without being amazing.  So when Teairra’s grandmother told her to pursue music, she knew what she was talking about.

Teairra began recording in studios when she was 16, and that year was signed by Jay-Z to Def Jam records.  They knew this girl was something special.  Her first single, “Make Her Feel Good” did well on the charts, but unfortunately for Teairra, the success did not continue.  Her first album sold almost 250,000 copies, but this just wasn’t enough for Def Jam and she was dropped before she could complete her second album.

She signed with a new studio and began work on a second album, but it was shelved after too many of the songs leaked.  She opted to instead release mixtapes, featuring some of her singles as well as work with other artists.

So… What is Teairra Marí’s Net Worth?

Teairra Marí wisely diversified her income streams when her music career didn’t pan out as she had hoped, and this has led to her building a decent net worth for someone as young as she is. Teairra Marí’s net worth is approximately $1 million.  Not bad at all for someone her age.  She has a solid fan base that continues to grow, which will likely lead to even more success for her in the future.