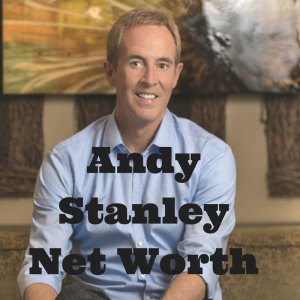 This week, let’s turn to a man of faith and look at Andy Stanley’s net worth.  Andy Stanley is the senior pastor at North Point Community Church and the founder of North Point Ministries, an international Christian organization.  Now, when you hear “pastor,” you probably aren’t thinking about someone who has a lot of money.  I grew up going to Catholic church, and I can solidly say that our pastor did not have a lot of money at all.  But Andy Stanley is the senior pastor at one of the largest Christian churches in the United States.  His six church campuses have an average of 36,000 people attend weekly services.  That is more people than were in the town where I grew up.  And these megachurches can make their pastors some big bucks.  But that’s not the only source of his income.

Andy Stanley received his bachelor’s degree in journalism from Georgia State University and his masters degree from Dallas Theological Seminary.  These degrees have helped him become an excellent writer and a wonderful public speaker who draws people in.  Andy Stanley has written more than twenty successful books including Communicating for a Change: Seven Keys to Irresistible Communication and Enemies of the Heart: Breaking Free from the Four Emotions That Control You. You can find his books and other bestselling books at Booktopia.

His words can also be heard on his weekly podcast, on his television show “Your Move with Andy Stanley” and at speaking events held all around the world.  Not only does he speak about faith but also presents to leadership conferences.

Andy Stanley has managed to turn his career as a minister into big business.  At only 59 years old, Andy Stanley’s net worth of a whopping $40 million.  Not bad for a man of God.  Though it makes you wonder what he’s doing with all that money.