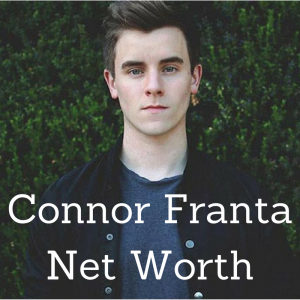 There are a lot of different ways to make money out there, and today I’m looking at Connor Franta’s net worth and his major sources of income.  Like Joey Graceffa, who I wrote about previously, Connor Franta started out as a YouTube vlogger.  But how did he get to that point, and where is he now?

Connor Franta was born in 1992, making him 24 years old.  In college, he studied business and arts, focusing on films.  In 2010, at only 18, he started his first YouTube channel, which is still active today.  He has over 5.6 million subscribers to his channel and over 400 million views. He has won multiple awards for his YouTube videos and is clearly quite popular.

Connor Franta is also somewhat of an entrepreneur, and has tried his hand at different businesses.  He has released six compilation albums of up and coming musical artists, and started a music label with the goal of releasing music from unheard of artists.  Many of these artists can be discovered on YouTube, so Connor is promoting people who are following the same path he did.

Connor founded the store “Common Culture,” which sells clothing, coffee, and music all in one location. He has also released two books of personal memoirs, stories and essays.

He hasn’t only looked to increase his own bottom line.  In 2014, he started a campaign to celebrate his birthday by raising funds to build wells in Swaziland.  He raised over $230,000.  Connor repeated this for his next birthday and raised an additional $191,000.

Connor Franta’s net worth is estimated to be $3 million, most of that earned from his very popular YouTube channel.  At only 24, this is a solid beginning for this young man, and he clearly has big ideas for his future.  It will be interesting to watch how his net worth grows over the coming years.