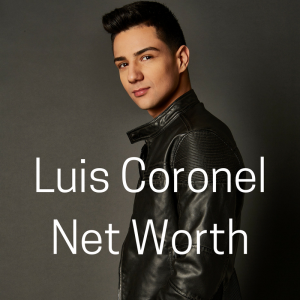 Luis Coronel is a 21-year-old singer who has made a name for himself in regional Mexican music.   He has used his talents to develop a tidy net worth sum at a very young age.

Luis was born in Tuscon, Arizona and grew up singing.  He joined his church choir at only six-years-old.  Like many kids in his neighborhood, he took up boxing as a kid, but after one boxing match, he decided to get up and sing for the crowd.  This performance was recorded and put onto YouTube and Luis became an overnight sensation.  Wisely, he stepped back from boxing and started focusing on his music.  He posted numerous videos of himself singing on social media, and at sixteen, he was signed by Del Records.  His first album, Con la frente en alto, was released in 2013, and his second album, Quiero ser tu dueño, was released in 2014.  Both reached gold record status.  He was named New Artist of the Year at the 2014 Latin Billboard Music Awards.

Luis keeps an active social media presence, a smart move for an artist of his age.  He regularly interacts with his fans and shares updates on his music and upcoming releases.

All of this work and success have helped Luis Coronel build a net worth of $2 million.  Given his level of talent and popularity, we can only expect that number to grow.  Luis Coronel has a bright future ahead of him.