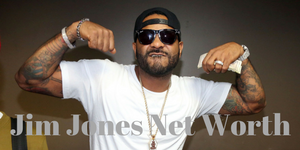 This week, I decided to take a look at some more celebrity net worth. I always find this topic interesting.   We think of famous people and automatically think that they have ridiculous amounts of wealth, when oftentimes, their net worth might only be a few million dollars.  (Not that I would complain about having “only” a few million dollars.

Today, I’m looking at rapper Jim Jones (not to be confused with People’s Temple leader Jim Jones).  Jim Jones is probably best known for his recent reality tv shows, beginning in 2011 with the first two seasons of Love & Hip Hop: New York, and followed up by the show Chrissy & Mr. Jones, which followed Jones and his fiancee.  He got his start in music in 2004 with the release of his first album, On My Way To Church. Since then, he has put out seven albums, two compilations, two EPs, and 17 mixtapes.  He is also a part of the hip hop group The Diplomats and the co-CEO of Diplomat Records.

This year, Jones signed to Jay-Z’s Roc Nation label, so expect to see much more from him in the upcoming years.

In addition to television and music, Jones has his hands in other areas of the entertainment industry.  He has appeared in movies and tv shows, has a clothing line, and manages a freestyle inline skating team that he plans to take to the X Games.

Jones has done an excellent job diversifying his income stream, expanding beyond his personal rap career, something that will serve him well in the future.

In 2017, Jim Jones’s net worth is a whopping $10 million.  Expect that number to continue to grow.  I wouldn’t be surprised to see Jones make an easy million in 2018 and beyond.

We can learn from Jim Jones’s approach to money.  The man knows how to hustle, and he’s not afraid to take a risk.  He finds an interest and talent and gets involved, such as with his clothing line.  Years ago, he had a feud with Jay-Z, but the two men have managed to put their differences aside to work together (and create considerable income for both of them).  If you’re looking to make more money, diversify your income streams.  Find out what you’re good at and make it work for you.

Be as Jim – save your money using writing guides from Howtowrite.Customwritings.com