One very common method of budgeting is the cash envelope method, where you take the money you have to spend on various categories (especially the categories where you tend to overspend, like groceries, dining out, and entertainment), put it into an envelope, and only use that envelope’s worth of money for that category.  It’s an easy way to prevent overspending – you can’t spend what you don’t have.

But spending cash all the time means that you likely have a lot of change rolling around.  Some people are great at spending coins.  I am not.  Most of the time, my change comes out of my wallet and goes into a jar on my desk.  But what happens when I’m ready to put that money into the bank?

Most banks now charge a fee for coin counting.  You can’t just walk in, dump your change into a machine, and deposit that amount into your account.  You have to pay a percentage for the service.  Why?  Because it’s time consuming for the banks.  Even if they have a machine for the counting, those machines require constant maintenance and monitoring.

So what’s the best way to handle your change?  Most banks will accept rolled change for deposit.  That means that you have to sort, count, and roll the coins yourself.  You can usually get free coin rolls from the bank – just ask the next time you stop by.  But what is the best way to roll your coins?

If you don’t have many coins, you may just want to sit down at a table and start stacking your coins in sets of ten, and then add them to the rolls.  If that seems overwhelming, there are some products you can buy, but remember, that’s going to make a dent in the overall amount you have to deposit. 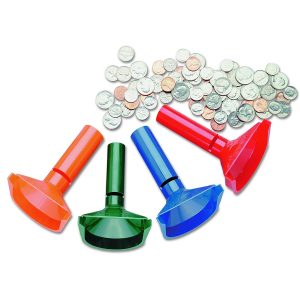 If you’re just not great at counting, you can buy some coin sorting tubes, which will help you ensure that you’re getting the right number of coins into each roll.  The paper rolls slide easily onto the coins in these tubes, which makes the process a bit less frustrating.  This is also an easy way to get kids involved in sorting out coins.  They can help you put the different coins into the tubes without you having to worry that the counts may be off. 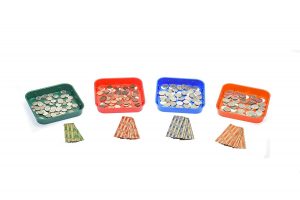 If you don’t want to spend a lot of time sorting out coins, you can purchase trays that are designed to make the process quick and easy.  These trays have different sized holes in them, so when you use them in order, each type of coin ends up in its own tray.  This will certainly speed up the process of sorting out coins. 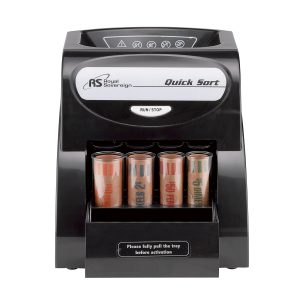 If you have a lot of coins, you may want to get an electric coin sorter like the one pictured above, which retails for about $40 on Amazon.  It sorts around 150 coins a minute, so you can just feed in handfuls and watch it go.  This is perfect if you’re the sort of person who has a five gallon bucket of change sitting around the house, but is likely overkill for most people.  Don’t get me wrong, I love a good gadget, but this one probably isn’t worth it.

Do you need any of these products?  Absolutely not.  If you’re not in a huge hurry to sort out your coins, I recommend making it a project you do while watching tv.  You don’t have to do it all at once.  Put a small pile of coins on the table, start sorting them out by denomination, and stacking them in sections.  When you have enough for a roll, fill the roll, seal it, and set it aside.  It’s a longer process, but it’s free.  You’ve saved up all that money, why spend it on something you don’t really need?