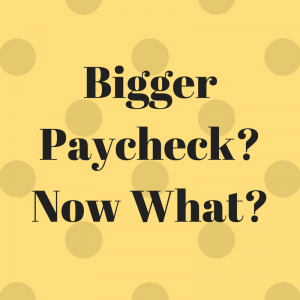 Now that it is February, many of us have received our first paychecks for the year, with the changes from the new tax bill in effect. Have you taken a look at your latest paycheck to see if there have been any changes?

Though the talking points from Congress seem to indicate that most of us should be seeing an increase in our take-home pay, your paycheck may not have gone up.  Your health insurance premiums may have increased (I know mine increase every year).  You may have opted into some changes, such as increasing your retirement contributions or adding money to a Health Savings Account.

For many of us, however, we are seeing a small increase in our paychecks with the new changes to tax laws.  When you get an increase in your paycheck, what is the best use of the money?

If the amount is small, say under $10, you might not think it’s worth paying attention to.  If you’re only getting an additional $1.50 a week, what can you really do with that?  And it’s true, that isn’t a huge amount of money, but even the small amounts add up.  If you’re currently getting by without that additional money, consider having that amount automatically transfer into a savings account every paycheck.   It can be money you’re saving for holiday gifts, for something special for yourself, or it can be money you’re slowly putting into an emergency fund.  No matter what the purpose, those small amounts slowly add up.

If you find yourself getting a bit more than $10 in your paycheck, you now have some decisions to make.  Of course, the option of automatically transferring the money to savings still stands. It is never a bad idea to put away money for a rainy day, and I think this should always be the first thing you consider.

But instead of just putting money away for a rainy day, what about increasing your retirement contributions.  Do you have an employer-provided 401(k) plan?  Are you contributing to it?  If your employer matches contributions, you should do everything you can to contribute up to the maximum match.  After all, the employer match is pretty much just free money.

Now, I get it.  You suddenly have $50 more in your paycheck and I’m telling you to have that money taken out and put away for the next 20-30 years?  I agree, it’s the least fun thing you could be doing with the money.  So why not split the difference?  Put half into your savings and half into your retirement.  Maybe the money you’re putting into savings is for something fun, like paying for a great vacation.  But it’s definitely worth thinking about your future while you’re also thinking about laying on the beach.  After all, don’t you want to be able to afford beach vacations when you’re retired?

Increase of More than $50

Now we’re talking real money, right?  I can hear you already.  “My paycheck increased by $100!  I’m rich.”  And yeah, an extra $100 a paycheck is a lot of money. And because it’s a lot of money, it can be really easy to fritter it away.  If you have an extra $100, you can certainly afford to eat lunch out an extra time or two, right?  And sure, you can afford that great pair of shoes.

And suddenly, that money is gone.

So this is when you want to make a solid plan for the increase in your paycheck.

Some of the increase should go into savings.  And I recommend you also take a look at your retirement accounts.  But once you’re satisfied with those two amounts, you have some decisions to make about what you have left.

One thing I think you should consider is making a contribution to a charity that is important to you.  Don’t worry, I’m not suggesting you give away all of your paycheck increase.  But maybe one month, consider donating that extra to someone else.

And okay, maybe you can have some fun too.  Don’t go too crazy, but a little splurge here and there isn’t the worst thing.  After all, that’s one of the benefits of financial stability.  You make the right decisions with your money and you have a bit extra when you want to have a little fun.