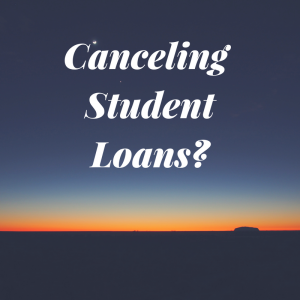 So I definitely found it interesting when I came across an article titled “Want to grow the US economy? Cancel student debt, new report shows”  The article discusses a recent report from economists at Levy Economics Institute of Bard College who believe that forgiving student loans would provide a huge boost to the U.S. economy, not only to the students who have their loans forgiven, but to the entire economy.

The report finds that canceling all student debt would likely lead to an increase in U.S. GDP between $861 billion and $1,083 billion over the course of 10 years. It would also lead to an increase of 1.18 to 1.55 million additional new jobs over the same period — that’s about 50% to 70% more jobs per year compared to an average of recent years.

Those are some amazing numbers.  But how much are we talking?  And can we actually afford to cancel this debt?

The report also finds that total loan forgiveness would cost the U.S. government approximately $1.4 trillion over the course of 10 years — a number that is almost exactly the same as what the CBO recently projected the Republican’s new tax bill would cost.

But researchers said that the positive impacts of canceling student debt would likely be more broadly felt than those of the tax bill.

I’m no economist, but I took a look at the original study.  In the summary, they state

In short, we find that debt cancellation lifts GDP, decreases the average unemployment rate, and results in little inflationary pressure (all over the 10-year horizon of our simulations), while interest rates increase only modestly. Though the federal budget deficit does increase, state-level budget positions improve as a result of the stronger economy.

Of course, I’m sure that if this plan were floated, there would be plenty of pushback, most likely from people who have already paid off their debts and struggled to do so, and from people who chose to not take on massive amounts of student debt and had to make tough sacrifices in doing so.  And I can see their point.

And let’s be honest – the cost of higher education in the United States is getting ridiculous.  More and more people are being priced out.  Of course, not everyone needs to go to a 4-year-college.  But price shouldn’t be the reason that people choose to not go.

I don’t think this plan will ever take effect, but I think it’s definitely an interesting study and something that should be looked into as we work to improve our economy.