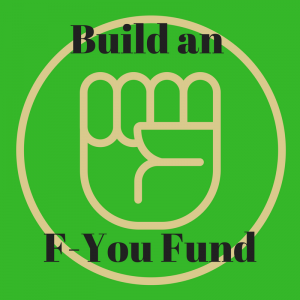 An F-You Fund is basically a big emergency fund, enough money to cover 6-8 months worth of expenses, so that if things are going terribly at your job, you can give it the old F-You and quit without worrying about how you’re going to make ends meet until you find a new job.

What’s the point of an F-You Fund?  According to this article,

It’s simply security to make sure that you’re not stuck at a job… You have freedom of not just finances but also freedom to do what you love day in and day out.

One big key to building this fund is the emotions behind it.  You can’t already be in a place where you want to run screaming from your job.  If you’re already extremely frustrated, the process to pulling together this money will be a huge emotional challenge.  Instead, this should be a plan to protect yourself.  It’s your golden parachute in a way.  If you are ready to get out, that’s when you will tap into this fund.

Building the F-You Fund takes the same steps that you follow to build an emergency fund:

Now, I’ll be honest – I’m nowhere near being able to build an F-You Fund.  My emergency fund is smaller than it should be, and I’m also trying to put together some money to do some home improvement projects.  But the idea of having an F-You Fund is very appealing.  Even though I have a job I love and don’t anticipate leaving anytime soon.  This is exactly when I should be setting one up.

One big goal this year is to increase my savings amounts, so maybe starting up an F-Fun might be one of the methods I use.  Even if it takes years to get it complete, it’s never a bad idea to save money.