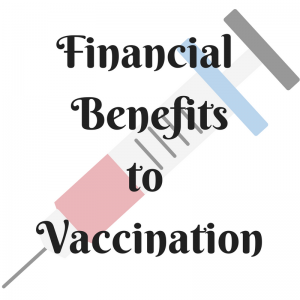 Should you vaccinate your children?

This is a common question among many new parents.  I’m no medical expert, but my personal opinion, based on much research is that you absolutely should vaccinate your children.  There is zero risk of autism.  And while there are risks of vaccination-related injuries, the risks are incredibly low.  Sure, no one wants to see their baby deal with the discomfort of an injection, but that discomfort fades quickly, much more quickly than a case of measles or whooping cough.

However, have you ever considered the financial benefits to vaccination?  I recently read an article that discussed a study that showed vaccines not only prevent illnesses but also poverty.

This study looked at 41 developing countries and created a model for the health and economic impact of vaccines for 10 different diseases.  Healthy children not only avoid heavy healthcare costs but they are also much more likely to go to school and ultimately become a productive member of the workforce as an adult.  The study shows that “this is enough to save millions of people from the misery of extreme poverty.”

Another recent study shows that in low and middle-income countries, for every $1 US spent on vaccination, there is a $16 US return.  If this were a stock investment, clearly we would all be buying.

It’s not a surprise that every year, more than 100 million people are pushed into poverty thanks to sudden health expenses.  Even if you’re lucky enough to have insurance, it’s never going to cover everything.

I found a study that looked at the cost of treatment for various diseases.  Let’s look at the DTaP vaccination, one that requires a total of five shots over 4-6 years.  This vaccinates for Diptheria, Tetanus (for which you should get a booster shot every ten years, even as an adult) and Pertussis.

Thanks to vaccinations, Diptheria is fairly rare, but can be spread through the air, and if contracted, has a 100% hospitalization rate, usually for around a week.  The average cost for this hospitalization is $17,000, and that doesn’t cover any follow-up care.  Sure, your insurance might cover a good chunk of that, but it won’t cover any lost wages for having to take off of work, or any travel costs if your child isn’t at your neighborhood hospital.

Tetanus also has a 100% hospitalization rate, for an average of over 16 days!  The average cost for this hospitalization is over $100,000!  Tetanus is also relatively uncommon in the US, but the majority of cases are in people who were never vaccinated or who haven’t had their booster shot every 10 years.  (If you take nothing else from this article, please find out when you last had a tetanus booster and make a plan for your next one.)

Pertussis, known as whooping cough, is a highly contagious disease that is making a comeback, in large part due to the pushback against vaccines.  It has a much lower probability of hospitalization – under 30%, and the cost is under $23,000.  However, if you have ever encountered someone with whooping cough, you know just how horrible an illness it is.  The cough lasts so long that in China, pertussis is known as the 100 Day Cough.  In babies, pertussis doesn’t cause a cough, they simply stop breathing.  It’s definitely a scary disease.

Clearly, from a financial standpoint alone, vaccines just make sense.  There is a huge financial benefit to vaccination.  You may have to pay a doctor’s copay to receive a vaccination, but the return on that investment is huge.  So if you have been wavering on vaccines, take a second look at the numbers and the studies linked in this article.  It just might be worth a shot (or rather, a few).