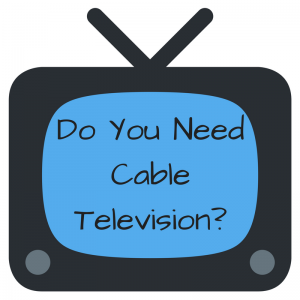 In early 2015, I decided to cancel my cable tv subscription.  I felt like I was spending way too much on cable tv and it just wasn’t worth it.  Three years later, I have no regrets.  I did, however, end up replacing the cable tv subscription with a few other items and services, so let’s do a comparison of the costs.

When I had cable tv, I was paying about $180 a month for a tv/phone/internet bundle.  I didn’t use the phone line all that much, so that loss wasn’t a huge deal (I had it mainly because the bundle cost was cheaper).  That also included DVR service.  I watched very little live tv – most of what I watched was recorded on the DVR and watched later.

For an internet only service, I’m currently paying about $85.  Given the three year time gap, let’s estimate that taxes and fees would have gone up enough so that the difference in the two costs is an even $100.

Well, not so fast…

You didn’t think I gave up television all together, did you?  But what did I replace it with?

Let’s start with hardware.  I bought a $20 indoor antenna so that I can get live local channels.  I’m lucky enough to live in a pretty heavily populated area, so the over the air signals are pretty strong.  If you need something that will pick up signals from farther away, you may need something a bit more pricey.

For reference, I bought the Amazon Basics 35 mile range indoor antenna and have had no issues.  (No sponsorship here, it’s just what I purchased.)

I also bought an Amazon Fire TV.  At the time, it cost $100, now the price is down to $70.  This is what I use to connect my tv to the internet for using various streaming services.  Some televisions have this built in.  My television is over ten years old, so that certainly was not an option.

All told, I spent $120 on hardware.  A little over a month’s worth of savings from canceling cable.

Clearly, if I bought a Fire TV, I was streaming something on my tv.  And while there are some things you can access for free, you do have to pay for a lot of the streaming services.

I do have Amazon Prime, but I’m not sure that price factors in here.  I did not get an account for streaming purposes, and with the exception of a few Prime-only shows, I don’t use it all that much.  While a lot of people love the streaming offerings from Amazon Prime, it’s just not something I would have splurged on, so I’m not going to calculate that cost here.

CBS shows are not available on Hulu, and I have quite a few that I enjoy, so I also have a CBS.com streaming account.  This costs $5.99.  They also have a no commercial option, but again, not worth the added costs.  CBS also offers a number of its older shows for streaming, so there is a lot of content here.  CBS has also started to get into the “streaming only” game along with Hulu and Netflix and has started offering certain shows on their streaming services only.

Finally, I have a Netflix account.  I had this before I cancelled my cable tv, but I’ll still include it in my replacement.  My plan recently increased from $9.99 to $10.99 a month.

That all adds up to $24.97 a month.  I have to admit, this is the first time I’ve added it all up, and I really feared it was going to be more than it was.

Now, not every show that you want to watch will be available on these streaming services.  There are some shows on basic cable networks that you can’t stream.  However, for many of those shows, you can purchase episodes or the full season through Amazon or Apple.  It looks like I’ve done that 7 times since canceling cable.  The prices vary, but for this estimate, let’s say I’ve spent $20 per season for a total of $140.

I will admit, I’ve also done temporary subscriptions to Starz and HBOGo to catch up on some shows, but since I didn’t have either of those channels prior to canceling cable, I’m also not counting that in the estimate.

So after three years, how much money have I saved?

A reminder of the numbers:

So over the past three years, I’ve spent a whopping $4218.92 on television related costs (though $3060 of that is the internet service itself, which is clearly much more than just television).

However, if I had kept cable tv, I would have spent $6660.  That’s a savings of $2441.08.  (This number doesn’t even take into account that I likely would have kept a Netflix account even with a cable subscription.)  Over $800 a year and I barely notice the difference.

I can’t say that I’ve missed having cable tv at all.  I know that I definitely splurge by purchasing some of my favorite shows rather than waiting for them to be available on streaming services.  But I have made a full replacement of what I used to watch and still manage to save a decent amount of money.

So if you still have cable tv, take a second look at what you watch and if you could replace it in some way.  You might be able to save money and not even notice the difference.