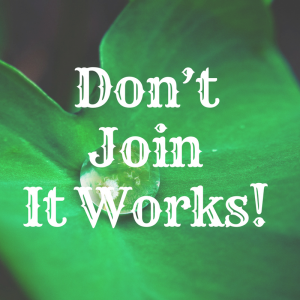 I find “sell-at-home” businesses, otherwise known as Multi-Level Marketing companies, absolutely fascinating.  While there are plenty of ways to make a decent income while working from home, joining an MLM typically isn’t one of them.  And some are so much worse than others.

A number of people I know have recently gotten sucked into It Works. And since they know I’m someone who tries to live a relatively healthy life, many of them have tried to get me to try their products.  And I absolutely refuse, mainly because I don’t believe any of the hype they’re selling.  In my opinion, companies like It Works are the worst type of MLM.  They force their distributors to buy ridiculous amounts of product and the products they’re selling are absolute garbage.

To join It Works as a distributor, you pay a startup fee of $99 (plus tax and shipping).  This gets you:

But you can easily recoup those costs, they tell you.  How?  Just sell those four wraps for $25-$30 each!

But that’s not it.  To be a distributor, you also have to have an autoship package coming to you every month.  That’s right you have to have a regular order scheduled.  And the order must be at least 80BV.

What the heck is BV?  BV, or Bonus Volume, is a value that It Works has put on their products.  For some products, it’s the price of the product, for some it’s less.  And let’s be honest, there’s likely no good way to get to exactly 80BV.  So you’re probably going to spending over $100 a month on this autoship.  These can either be products you’re going to use yourself, or, more likely, products you’re going to then try to sell to others.

I saw one person recommending that each new distributor setup an autoship for two boxes of wraps (8 wraps total), which would cost $130, but she could easily resell for $200.

In addition, if a distributor wants people to be able to go online and order products through her (rather than doing all sales in person), she will also need to pay for her online marketing suite, for $20 a month.

These are the ways that a distributor can make a commission on her products.  So if she wants to keep her commission coming in, she needs to keep buying that autoship.  You can see how people end up with stuff stacked up in their homes.

Is It Works a Pyramid Scheme?

It is amazing to me how obvious it is that It Works is a pyramid scheme.

From what I can tell, Loyal Customers setup an autoship for a minimum of three consecutive months, and by doing so, get discounts on products and free shipping with a minimum purchase.  And of course, distributors get a bonus for signing up Loyal Customers, so every distributor is going to push you to join.

Most of the sites I’ve found geared towards It Works distributors talk about how incredibly easy it is to work your way up the ranks.  I even found a site that talked about the best timing for signing up your spouse and other household members.  That’s right, to make more money, make your spouse a distributor under you so that now your household minimums have doubled!  That stuff in your minimum monthly order is going to start to stack up.

If you read closely into the numbers provided by It Works, most of the distributors are paying more to be a part of the company than they are making.  Sure, some people are making money.  That’s a given in a pyramid scheme.  But the odds are good that most distributors will not.

If you want to see just how destructive this sort of company can be, check out the documentary Betting on Zero, which is available on Netflix.  It’s about Herbalife, a huge pyramid scheme that has destroyed thousands of lives.

Do the Products Work?

No.  Not really, anyway.  Distributors will tell you that the wraps will reduce fat and cellulite wherever you apply them.  I’ve heard that for best use, you should even cover the wrap in cellophane wrap while you wear it.  Why?  Because all you’re doing is dehydrating your skin.  Will that make you look slimmer?  Sure, but not by much, and as soon as you drink a glass of water, your skin will puff back up, the way it should look.  I suppose if someone wanted to use this right before they went on stage at a bikini competition, it might have value.  But how many of us are doing that on a daily basis?

Another popular product is the Fat Fighter with Carb Inhibitor.  I have seen so many photos of a slice of pizza next to a bottle of Fat Fighter pills with a caption claiming that the Fat Fighters are what lets the woman eat what she wants and retain her figure because they block the body from absorbing the fat and carbs.

First off, if the pills were actually going to block that fat, there would be some unsavory side effects.  Have you heard of Alli?  It’s an FDA approved product that does block some of the fat in your food. With Alli, you are told when you start taking it that you might want to wear dark pants and carry a change of clothes because you might, ahem, leak some of the oily fats.  But all of the consultants swear that this never happens with the It Works products.  Okay, either they’re lying or the product doesn’t work.  I suspect the latter.

There are also greens, which “alkalize and detoxify.”  You don’t need to alkalize, or change the pH of your body, and your body does a fine job detoxifying itself.  If you really want a greens supplement, you can do some research and find a much better one at a much lower price.

Are all MLMs bad?

I feel like MLMs have different levels of “badness.”  And it’s all about what they’re selling and what they require of their distributors.  Some MLM companies have been around for decades – companies like Avon, Mary Kay, and Tupperware.  While distributors can make more if they sign up people under them, plenty of ladies happily sell without ever signing up another person.

I have bought from some friends who sell from MLM companies – I really love my pizza stone from Pampered Chef, some of the food from Tastefully Simple is delicious, and my 15-year-old Tupperware is still going strong.  But none of those products pretend to be something they’re not, and not one of those people has tried to push me into joining under them and becoming a consultant.  That tells me that those companies are pushing the product rather than the pyramid.  I still don’t recommend MLMs as a whole, but some are decidedly worse than others.  Just be careful of what you’re getting yourself into.